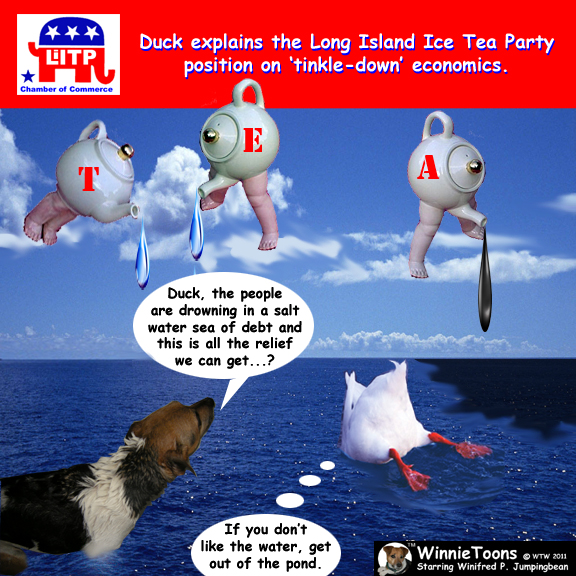 Long Island Ice Tea Party front-runner, Ms. Duck D. Duck has arranged in backroom deals with the Koch Brothers Barnum & Bailey Circus to fix oil futures to keep prices high while blaming President Obama.  High oil prices enable food and commodity prices to go even higher, which keeps the American middle-class in economic quicksand.  Candidate Duck has been quoted as saying:   “It’s vitally important to shrink the middle-class and insure their children are never properly educated in order to keep them poor, stupid and gullible enough to pull a conservative lever in 2012.”  (From which Duck, herself will personally benefit.)

Duck claims to have been misquoted when referring to Mitt Romney’s faith as being a cult of morons.  What she meant to say, was “I admired Romney as the CEO of Bain of Our Existence Enterprises, where his mission was to close American companies and ship jobs overseas – but he didn’t go far enough.  There are still people on the planet enjoying freedom, and what was that touchy-feely health-care thing about?”

While personally admiring Mr Romney’s intentions, she felt his efforts should have included the reinstatement of slavery in the United States.  Ms Duck went on to say, “If Obama is to be defeated in the next election cycle, it is in the best interests of conservatives to do everything in their power to keep unemployment high through whatever means and tactics necessary – ethics be damned.”

Yesterday, June 11th, 2011 was the ten year anniversary of the disastrous Bush tax cuts for the top 2% of the nation.  This ill-conceived plan has cost the United States trillions of dollars in lost revenue – now carried on the broken financial backs of ordinary citizens – as well it should be.  This allows American jobs to be sent overseas to nations who do not ascribe to limits on human rights violations – be they child or forced labor – so American citizens can run-up credit card debt while price-shopping at the mall in stores on the verge of chapter 11.

Political adviser and campaign manager, Winifred P. Jumpingbean has urged Duck to make a statement about the economy to help insure the destruction of the American dream to keep that dream isolated to the people John Boehner has on speed-dial and/or anyone one who has more than 2 vacation homes which are fully paid-off.  In accordance with that advise, Duck D. Duck who, if elected has made the following solemn promise to the American people: “If we are going to keep our life-style stable for wealthiest 2% of the nation, it is imperative we destroy the environment – future generations be damned – today‘s bottom line is all that matters, other than the price of 1907 Heidsieck champagne which been sitting on the bottom of the ocean for the past 99 years, and is being sold for the bargain-basement price of $275,000 per bottle.”

Duck made her statements in front of Philadelphia’s Liberty Bell during the 3rd pre-summer heat wave to the dazed and astonished applause of wilted tourists who thought they would be given bottled spring water.

Duck went on to praise the series of ‘pink-slips’ issued today to under-paid educators in the city of Philadelphia, adding “Thank God everyone is focused on Anthony’s Weiner – this way we can screw ‘em whether they pay attention to the news or not.”

In a post interview statement given exclusively to the National Inquirer, Duck announced her intentions to revive the now defunct White Star Line, and encouraged the top 2% to not only invest, but to purchase tickets for the maiden voyage.  Duck in fairness to the record was proud to admit she “floats in a variety of weather conditions.”  The maiden voyage is scheduled for April 15th 2012.

3 thoughts on “Candidate Duck D. Duck on the Economy”