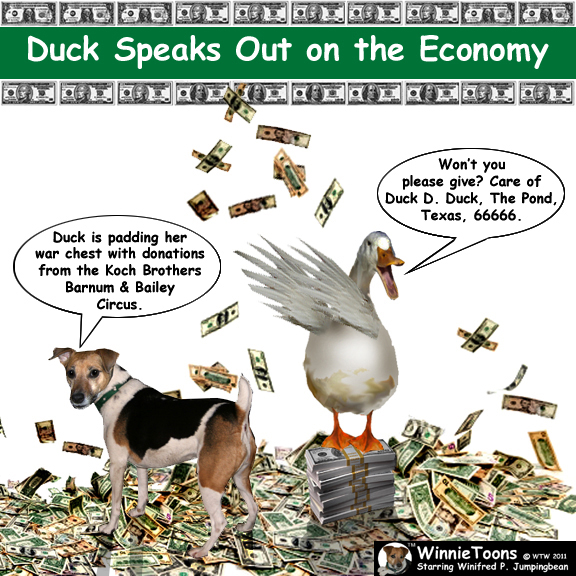 Mounting a presidential campaign is not for the faint of heart nor pocketbook.  This is why most politicians come from the wealthiest gene-pools financially speaking while encouraging moral bankruptcy.  In keeping with that tradition, Winnie and Duck have begun making cage-rattling calls to their supporters who are responding with bucket loads of cash.  According to Koch Industries spokesperson, Miss Georgia Pacific, Duck’s campaign has already put the touch on the Koch brothers for an undisclosed figure in exchange for granting exclusive rights to mow-down all our national parks.  With the national forests leveled, there will be no need for the National Park Service, therefore saving every American taxpayers a whole dollar each.

Monday marks the launch of Duck D. Duck’s national book tour titled ‘Duck Confit Dental.’  Advance orders have books flying off the shelves before they’re even printed.  The main premise of the book outlines Duck’s plan to convert all the wood taken from our national parks into pulp so she can print more money – thus tearing a page from modern Greece’s economic model.

Speaking on behalf of the presidential hopeful, Ms. Winifred P. Jumpingbean let it leak to the press that once elected, Ms Duck will end the Bush-era tax breaks for the wealthiest Americans and replace them with no taxes at all on the upper two percentile.  She explains how this will boost the economy and take the burden off the middleclass by selling seniors and the unemployed to China to do with them what they will.  Duck, who is not fond of the word “trafficking” prefers to think of it as a worker “redistribution” program.  This program will both lower the unemployment rate while replacing precious entitlement funds back into the greasy palms of government to abuse, ignoring the outstretched hands of those who’ve actually paid into these safety nets.

Last week at the Republican’t National Conference, Duck D, Duck, heading the Long Island Ice Tea Party delegation stood-up for her principals by saying “For the past decade, we’ve been shipping-off perfectly good healthy young people to die in the Middle East, and it’s cost us a fortune.  Instead, let’s ship America’s elderly and unemployed to China to pay-down our debt, knowing America’s indigent and elderly will be served exotic cuisine and offered some sort of shelter.”

3 thoughts on “Duck Speaks Out on the Economy”