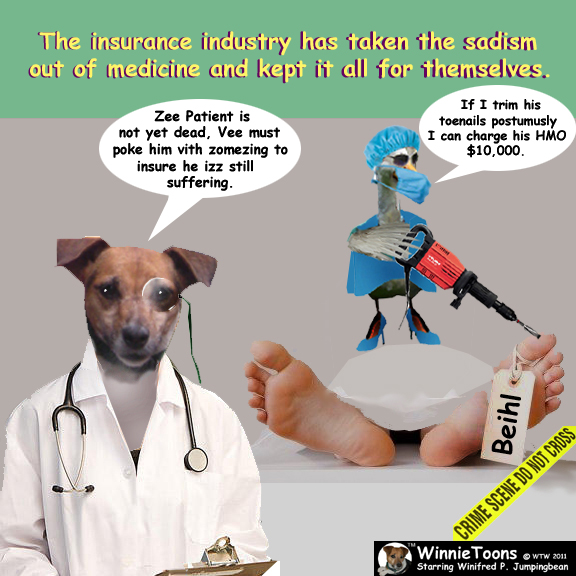 When my late father was in a nursing home I called repeatedly to tell the doctors my dad’s feet were hurting him.  He had enlarged toenails that caused him pain.  After months and months of fruitless calls, I regularly brought a Dremel-drill grinding tool to the home and ground-down the painful nails myself.  Imagine my surprise when after Dad passed-away, I noticed on the final invoice THOUSANDS of dollars for alleged care from a podiatrist who never once showed-up.  I performed that care myself, and fought the invoice tooth and nail – and won.  That’s enough talk about toenails.  We have irritable bowels yet to discuss…

Click-off now if you don’t wanna hear it like it is.  I have a colon disease that requires constant monitoring and makes for unexplainable situations.

As a typically paranoid older adult who has all the health problems that go along with our inevitable decline toward the Elysian Fields – I pay my health insurance a good two weeks prior to the invoice due-date.  I also have failing eyesight.  But, as I promised to discuss my bowels, far be it from me to disappoint.  Having chronic colitis (and impaired vision) I pay my medical insurance invoice like clockwork.

For 3 days prior to a recently scheduled colon-scope, I spent a burning hell-on-earth prepping for the procedure – call it a 3 day siege of the porcelain goddess.  I readied myself to have a high-tech camera crew travel a ‘Fantastic Voyage’ into my lower intestines with all the unparalleled joy that comes with a bowel obstruction.  Suffice it to say, it’s no picnic swallowing gallons and gallons of Miralax mixed with Gatorade along with other poisons to make ready for the test.

Just as I was about to slip into my backless designer hospital gown, the nurse’s aid told me my health insurance had been cancelled the day before and the procedure could not be performed as scheduled.  At first I thought she was talking to someone else.  I NEVER fail to pay my health insurance.  But the last payment covering the month of July, due to my blind eyes, I made an inadvertent human error I could never have anticipated.  I read the number ‘eight’ for being a number ‘six‘, and underpaid my insurance invoice by TWO GODDAMN FUCKING DOLLARS and my health insurance was cancelled.  My medical insurance payments which up until last month had been $165 a month had just jumped to $498 a month.  Due to my eyesight I wrote a check for $496, thus making a payment which was two dollars short.  Now if you underpaid your electric bill by 200 copper pennies, they would not put out your lights.  They’d add $2 to the next month’s invoice, and all would be fine.  But NOT the medical insurance whores.  They’ll gladly keep the $496, give you nothing, and let you die over a $2 human error.  Who cares if you’re bleeding from the anus.  The insurance industry is hurting so much financially that lower level executives have to rent-out their 2nd and 3rd vacation homes to strangers.  People have priorities, misplaced as they may be…

All day today I fought to get reinstated, and they refused to accept a $2 payment over the phone, and insisted that it be paid via money-wire along with a $38.04 penalty charge.  The money transfer was $55.  SOOOO, a $2 human error cost me almost $100, wasted time and the discomfort of an unnecessary colon-cleansing – thus prolonging my worry as to what is wrong with my health.  My dearest wish is for the entire health insurance industry rot in my own personal homemade sewage.  Consider it a donation on my part.

But this is far from being my most upsetting or embarrassing hospital experience.  Some years back I was in one of the historic Philadelphia hospitals named after a founding father.  (They all are.)  I arrived for a routine physical and was made to get naked and put-on a backless paper gown.  Without warning the office sprung a ceiling water leak.  Rather than sending all the patients home and rescheduling us – we were transferred to a different floor to share offices and examination space in a dry office.  Robes and towels were in short supply, so with my clothes locked-up on a different floor, I placed my hands behind my buttocks and shimmied down the hall and elevator to the temporary examination space outside the first floor lobby.

People were placed in janitorial closets, office spaces and whatever was available.  I was abandoned to a conference room where someone had considerately placed a long paper runner down the center of the table, closed the door and and was told someone with be with me shortly.  I stared at the ceiling for a very long making imaginary shapes out of the stains on the acoustical tiles until I fell into a deep, deep sleep.  I have no idea how long I was asleep when I felt a pinch on my flesh.  I awoke with a groggy and startled disorientation only to realize I was looking like a 1-800-FLOWERS centerpiece arrangement in the middle of a conference table surrounded by international foreign exchange students.  To the left and right of me were young people in turbans and saris and other traditional national garb, all of whom were poking at me with ball-point pens trying to determine if I was dead or alive and if they could extract my spleen for extra course credits.

I screamed, jumped to my feet grabbing the full length of paper runner and bolted for the first floor waiting room where the automatic exterior doors let in arctic breezes every time anyone walked past the electric eye exposing me like a saggy old Marilyn Monroe impersonator standing over a subway grate.  My paper ensemble blew all directions at once toward the ceiling revealing what little god had given me to thunderous laughter and applause from the other victims awaiting their own humiliations.  The head nurse, still in shock said “Oh, Mister Whiting, we’re so sorry.  We thought you’d left – no one could find you.”  I secured my street clothes, changed in the janitor’s closet and beat a red-faced hasty retreat, never to return to that august historic hospital ever again.

We are all doomed.  We’re born and we die.  In-between the fates work overtime to see to it we experience the maximum number of humbling public traumas.  But always remember, we Americans have the best health care in the country, just so long as you don’t compare it with other more sensible nations who view our ‘for-profit health insurance system’ as nothing short of primitive.

Anyone have a number for a good, reliable shaman?

2 thoughts on “Who Needs a Public Option When the System We Have is SO Much Fun?”