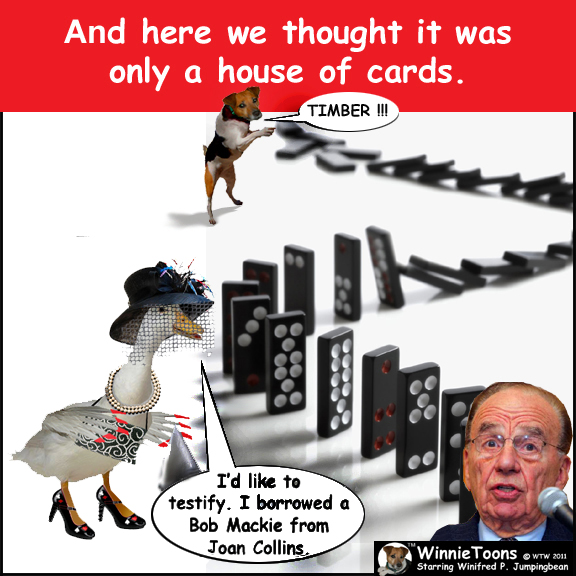 Duck D. Duck’s shocking testimony in front of Parliament in the ‘News of the World’ scandal has Rupert Murdock feigning further acts of senility.  The question on everyone’s mind, is will this hurt Ms. Duck’s American presidential chances as the Long Island Ice Tea Party frontrunner?

Ms. Duck, who was stunning, donned an original Bob Mackie ensemble borrowed from actress Joan Collins who wore it in court when testifying about who shot J.R Ewing.

According to candidate Duck’s lawyer and campaign manager, Winifred P. Jumpingbean, “Duck D. Duck is comfortable with her transgressions on either side of the pond, and is certain she will be cleared of any wrong-doing.”  Murdock’s media giant, POX News is reportedly responsible for hacking Ms. Duck cell phone to release unauthorized photographs of her urodaeum to the tabloids through dimwit blogger, Andrew Notsobreitbart.

The release of that photo and the hacking techniques used to acquire it may well lead to a ‘domino’ effect resulting in political implications that cause the entire downfall of all Rupert Murdock’s minions, and coconspirators — coconspirators such as the Koch Brothers and the knuckleheads in the GOP leadership of the American House of Misrepresentatives.  Further ramifications might result in Grover Norquist (not to be mistaken for Wilford Brimley) to admit he is far more taxing than any of his bogus politically-motivated tax blackmail documents.  Ms. Duck allegedly signed Grover Norquist’s ‘No New Taxes on the Wealthy Blackmail Pledge’ in invisible ink.

As those dominoes fall one can only hope it takes down the entire POX News, Misinformation of the World Network.  Suspected dominoes are Karl Rove, Jim Dement, Rick Sanitarium, John Boner, Eric DeCanter, Bitch McConnell, Bitchelle Mockman, Para Sailin’, the Mormon Tabernacle Choir, Scotland Yard and British Prime Minister Gordon Brown.  This might suck the wind out of such POX talking heads as Sean Insanity, Bill Oh’Really? and Mount Rushbaugh.  That said, earlier casualty, Glenn Beck in unrelated developments went down on himself, causing his own pitiful disappearing act.

At the hand of POX News/Misinformation of the World, the public has endured numerous bogus “factoids,” as the manipulation of politicians and the Supreme Court in the pocket of the Koch Brothers (through “Citizens United’) and an unregulated Wall Street blatantly ran amok.  Sadly, an alarming number of gullible citizens drink blindly from the poisonous well of these skillfully crafted lies spun by the tentacles of Rupert Murdock‘s news machine.  The motto of ‘Unfair and Unbalanced’ which has come to define Mr. Murdock’s empire supplies people with what they want to hear if they’re predisposed to certain prejudices and fears.  Truth be damned.

Spokesperson, Winifred P. Jumpingbean quoted her humble typist, Beihl as saying, “If I cared about money, I’d be on Wall Street and not Tobacco Road – either way – they’ll both kill ‘ya.  Its survival of the fattest.  Poor people eat fattening food to survive.  Fat cats eat poor people’s food and call it cassolette.”  Honor matters.