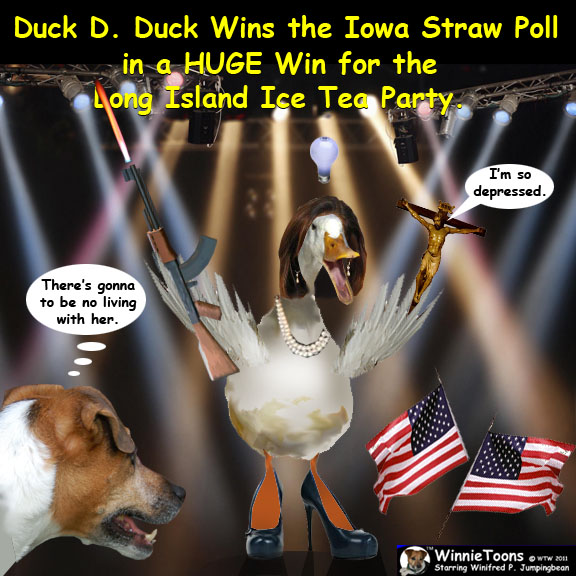 Duck D. Duck’s campaign manager, Winifred P. Jumpingbean expressed concern that “many Iowa voters will not live ’til election day 2012 if they went-on eating deep-fried Snickers Bars wrapped in bacon.”  She went on to say how candidate Duck D. Duck blew the competition out of the water by reminding voters during the debates how Ms Duck had sponsored the “Light Bulb Freedom of Choice Act” while dictating in no uncertain terms what perfect strangers may or may-not do with what they have between their own legs.


Fried foods and inefficient lighting framed the central theme of Duck’s campaign platform, all but eclipsing God Father Pizza CEO, Herman Cain, who managed to give-out only 3 slices of pizza to the largely white crowd – due to their lack of familiarity seeing people of other races handling food outside of the kitchen.


Duck beat-out such formidable opponents as Rick Sanitarium who feels boosted by the 10% vote of no-confidence displayed by straw-pollsters most of whom are even less coherent than himself.  Tim Pawlenty, now millions of dollars in debt, is rethinking his campaign slogan of “Good ‘n Pawlenty.”  Ron Paul packed-up his lack of marbles and went home taking his libertine values with him.