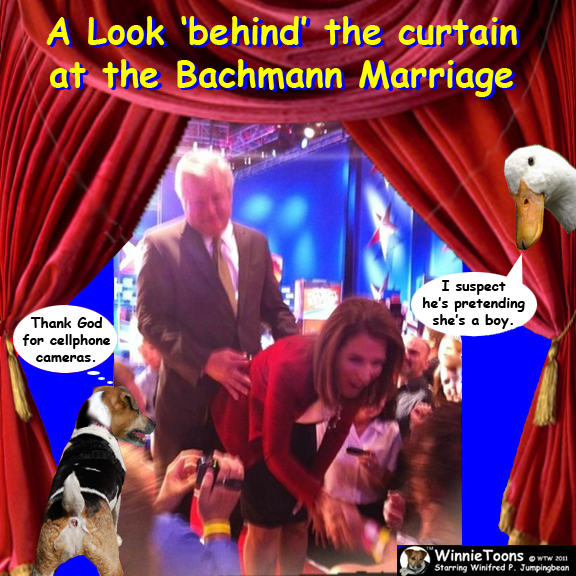 Michele and her t’silly husband Marcuth Bachmann sure do know how to swing-dance. First he had her deep-throating corn-dogs at the Iowa State Fair, and now they’re doin’ the butt-bump for Jezus during her hopeless bid to become the leader of the free world.

Bachmann, who lives in a disturbing alternate universe, also sits on the House Intelligence Committee where she doesn’t know the difference between an IUD and an IED anymore than she knows when there’s a heat-seeking missile approaching her from the rear.

Bachmann is officially irrelevant as a possible Republican candidate for president since Rick Perry tossed-out the real red-meat for the Tea Party crazies to chew-on. At the first Republican debate mediator, Brian Williams asked Rick Perry about his stunning gubernatorial record for the highest number of human executions in the United States as a governor – the entire audience erupted into a spontaneous standing ovation even before Perry had a chance to answer.

Bachmann, not to be outdone, vowed to block a woman’s right to choose, saying “If I can block both abortion rights and destroy America’s school systems, governors like Rick Perry will have an endless supply of ruined lives to snuff-out at will.” She later added, “And should any of those un-aborted children turn-out to be gay, they can be treated by my husband, Dr Marcuth where he will carefully council them toward suicide.”

At the second Republican debate another glancing blow hit Bachmann, who’s poll numbers have slipped from front-runner to the low single digits, when Ron Paul (no relation to RuPaul) stated his belief as a former physician that people too poor to afford health insurance should be left to die on the streets – AGAIN meeting with the loudest applause of the evening – shaking second mediator, Wolfe Blitzer to his foundations where he reportedly stained his boxers.

The most controversial moment of the second debate happened when Rick Perry was called to task to explain his state-mandated vaccine for preteen girls to prevent HPV cervical cancer using a controversial new drug from campaign contributor, Merck & Co.

Sticking-out her tongue at Governor Perry, Representative Bachmann said “Merck gave you $5000 in campaign contributions.” To which Perry retorted “That you KNOW-of…!!! How insulting, I can’t be bought for a mere $5000 – I’m a high-priced political whore. Most of Merck’s donations are made to me on the sly through ShillPAC.”

Desparate for attention, Michele Bachman shot-back by saying “HPV vaccine can cause mental retardation, and there are already too many Palin’s in the world.” Her husband, Marcuth, sitting the in audience beaming, was later overheard saying “If any children are going to receive injections in the rear, it should be little boys, and I’m just the man to do it.”

Mitt Romney appearing disoriented and confused at both debates was unclear as to how corporations could either contract or be treated for HPV let alone have abortions, since corporation are after all (my friend) PEOPLE.