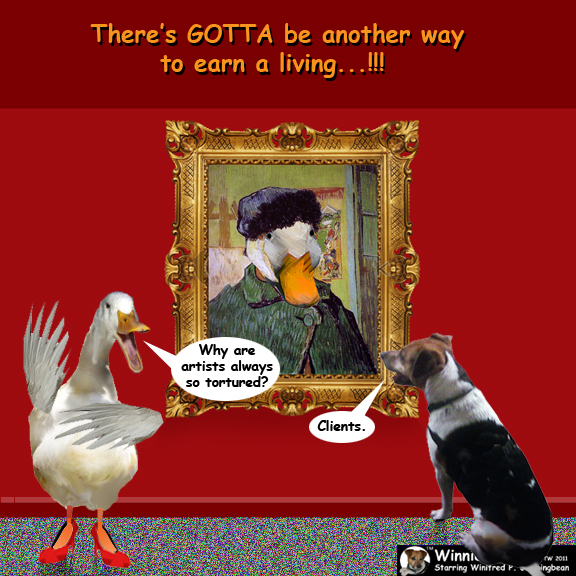 I don’t mean to complain, but who am I kidding?  Of course I do.  Making your living as an artist is the work of dreamers and fools.  Fools like me, who never really considered ever being anything other than an artist.   An artist is like the proverbial ‘canary in a coal mine’ when it comes to the economy.  Art whether commissioned by individuals or corporations IS discretionary spending.  When money’s tight, art is the first thing to go.  Even before the rest of the world notices the economy is in the crapper, artists, who for the most part, scramble to survive as it is, thus feeling the pinch first.  The economic downturn started for me about ten years ago.

Curiously enough artists are one of the few professions where ‘tinkle-down’ economics does to some degree apply.  However, even in the best economy people want art to be dickered-down to as cheap as possible if not out and out given away for free.  Most of what I create winds-up being bartered just to survive.  Money?  What the hell is that?

There’s a interesting dynamic to being an artist insofar as artists of all descriptions and disciplines occupy both the pit and pinnacle of society all at the same time.  Van Gogh while a genius, (granted, a schizophrenic genius), didn’t have a pot to piss-in – however once he died his work went on the auction block for record amounts in the millions.  He never enjoyed any of that financial success while alive.  Art dealers and collectors on the other hand, did.  How demoralizing is it to think you have to be dead to be worth something?

Cultures are defined by the art they produce, be it painting, sculpture, music, dance, architecture or come what may…  Try and get a mortgage or a bank loan with any of the aforementioned listed on your resume, and there’s not a chance in hell.  If you’re a paper-pushing cubicle-monkey, all the way up to the paper-pushing CEO-monkey earning money off of money – doing whatever the devil paper-pushers do – you’ll get a bank loan or mortgage – perhaps even two.  Most paper-pusher’s work eventually winds-up shredder, leaving little to show for what they’ve done aside from collecting a steady paycheck.  Art lasts and continues to give.  Expensive plastic gadgets and other “trendy cool stuff” breaks down and fails you, while a treasured work of art is always there to enjoy.

I’ve dealt with clients who don’t know what they want, then try make it your fault when you haven’t properly read their minds.  I’ve had clients who put-down a deposit on a commission they brag about loving, but never pay the balance because they know an artist doesn’t have the financial means to pursue them in court.  Meanwhile the artwork looks lovely in their lavish Society Hill townhouse.

Something my wealthiest clients love to say is: “Isn’t that painting lovely?  It was a gift from the artist.”  (Probably in exchange for a meal.)  Knowing artists is cool.  Being one is nothing short of demoralizing.   My most affluent accounts over the years frequently drag-out final payments for 120 days and think nothing of it.  When I call the bookkeepers with cage-rattling calls for balances due, I hear things like “Mr So-and-so has taken a villa in Tuscany for the next two months, and won’t be able to sign your check until he returns.”  How nice for Mister So-and-so.

A word of advise to all the aspiring young artists out there:  Learn from my example and acquire a marketable skill aside from painting, dance or sculpture, etc…   The idea of being a starving artist is much more romantic in theory than it is in reality as a lifestyle.

I might as well start another painting that I’ll only wind-up giving-away anyway.  That’s how the business works.