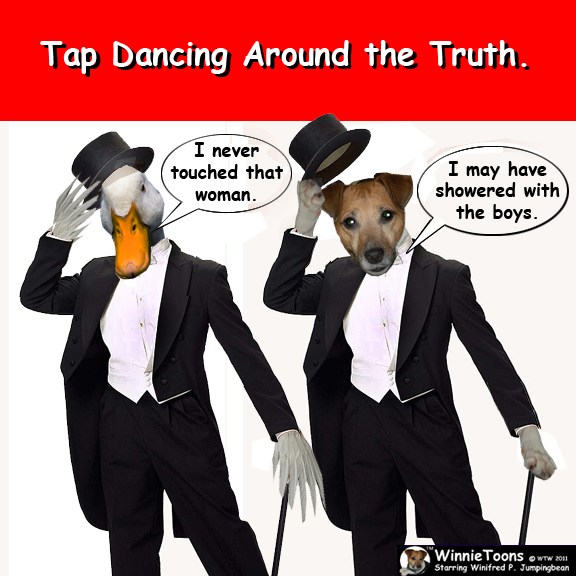 The past few weeks of news have been full of appalling allegations of sexual impropriety.  Even an adult woman stepped forward accusing teeny-bopper Justin Bieber of fathering her baby – and in doing-so doing so put herself in the potential hot-seat for statutory rape.  Bieber handled the absurd allegations like a mature adult, and put the matter to rest as nonsense.  The accused adults in the other disgusting sexual dramas of the past week have not.

Sexual impropriety is in the news almost every day, and it wouldn’t be so surprising were it not for the power-players involved and the nature of the abuses.  No one ever expected to see the legendary Joe Paterno retired from Penn State’s Nittany Lions under such a pall of disgrace.  Inaction is Paterno’s crime, failing to take more definitive steps when confronted with a horror story of child sexual abuse.  Unrelated, but concurrent news made Herman Cain the subject of allegations for multiple cases of sexual impropriety while employed as the CEO of Godfather’s Pizza.  The Cain case may be salacious, but it isn’t nearly as disturbing as what allegedly took place at Penn State.

I suspect both cases have one thing in common: hush-ups by the human resources departments of both institutions.

Employees who work for a large institution believe ‘human resources’ is there to guide and protect them.  It’s more accurate to assume the covert mission of human resources is to protect the reputation of the institution they serve – hopefully never needing public relations to put a ‘spin’ on whatever skeletons might be hidden in the corporate closet.

I can’t find it in me to write anything humorous about either of these headline stories.  Both are tragic on too many levels to explore.   That said, generic sexual misconduct is disgusting enough – but pedophilia is beyond repulsive.

Herman Cain’s actions are not proven, but where there’s smoke…  That said, Mr Cain’s actions don’t call into question the integrity of all CEO’s any more than it does that of every man or every black man.  It’s preposterous to assume a generalization like that.

As a gay man, one concern I have, is the fear that charges leveled against former assistant coach Jerry Sandusky might cause a backlash against the general population of gay men.  Sandusky is a pedophile, which is entirely different than being a gay man.  Looking back, people were not inclined to believe all female middle-school teachers were sex-offenders when Mary Kay LaTourneau gave birth to a child fathered by one of her students.  Clearly the immediate concern is for the victims – however, I hope people, will not, in ignorance equate the Penn Sate scandal with the mainstream gay lifestyle.

I had an experience when I was a little boy where an older teenager molested me.  I couldn’t have been more than 7 or 8 years old at the time.  Right after it happened, I went home and told my parents.  My father went to the teenager’s home and punched-out the kid’s uncle, who was raising the boy.  The teenage boy was sent to reform-school.  Now I can’t help but wonder if he was acting out of learned behavior at home.  I’ll never know.  Following the incident I experienced, my reaction was to get fat.  Prior to that experience my name used to come over the school’s PA system once a week – “Will Bill Whiting please come to the nurse’s office for underweight check.”  I still find it difficult to believe they used to do that.  I started to over-eat in an effort to get fat so as to hide myself.

My experience when I was a boy isn’t what made me gay – and it most certainly didn’t turn me into a pedophile.  If anything, that experience left me with an extreme discomfort with sexual intimacy I’ve battled most of my life.  As an adult, I’ve fended off unwanted advances, but I was better prepared to do so.  As a child, I was not.

Herman Cain’s shenanigans were appalling, but not surprising.  Pedophilia on the other hand is an inexcusable disorder which psychiatric experts claim is incurable.  It is important to stress that pedophilia should not be confused with homosexuality.  In point of fact – most pedophiles are heterosexual.

There seems to be an odd kind of similarity between misconduct among politicians and misconduct among sports heroes.  Too much power and not enough accountability.  But primarily what I’m left with is a sense of horror and compassion for the victims of any and all abuse.  The reputation of a corporation or a school is not worth the damage suffered by victims of sexual abuse, especially when they are children.

3 thoughts on “Tap Dancing Around the Truth”