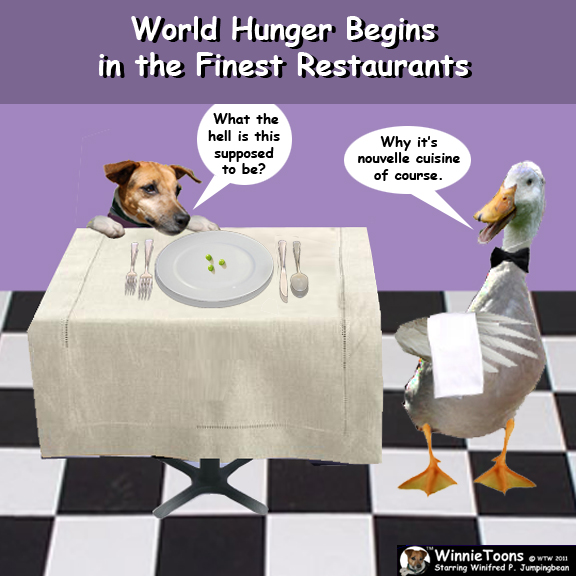 NEWS FLASH:  The rich are starving themselves to death while people like me are lucky to live on a $200 a month food allowance.  Winnie and I are not only among the 99% – we live way below the poverty line.  Artists have always struggled financially unless they’re really sell-out artists who are more ‘left’ than ‘right’ brained with wealthy parents – OR – lucky enough to have landed a personal Medici.  Winnie eats kibble, and then she’s allowed to lick my plate clean when I’m done.  I’ve become accustomed to rice and beans or peanut butter and jelly sandwiches, but on the rare occasion that I do get to go out for dinner, I don’t want a plate half-filed with decorative garnishes hiding an entree no bigger than an appetizer.


While I’m poor, the greater number of people I know socially are not nearly as bad off as myself.  Truth to tell, some of them might even be in the upper one percentile, but they belong to the small faction therein of wealthy-folk who wouldn’t object to paying a little more in taxes.  Some of these mini-Buffets have taken me to restaurants where “buffet” would be de rigueur – salad bars are apparently for the lower middle-class.

I was at one restaurant where my dinner companion ordered a ‘house-salad’ – and out came a careful arrangement of greens fastidiously trimmed like a box-hedge, no bigger than a credit card floating in the middle of a HUGE otherwise empty plate.  I suppose it should come as some comfort to the poor that the rich aren’t getting enough to eat either.


Imperious aspiring thespian waitrons describe the specials of the day which sound to me like ‘The Lord of the Rings’ translated into Coptic and read backwards.  “Tonight’s special is a kerfuffle of blunderbuss marinated in a semi-sweet reduction of freeze d’anti topped en glaze with a confusion of sauteed aphasia, garnished with a decorative pap-smear and one artfully placed berry for fifty-five dollars.”  Are they fuckin’ kidding me?  Better than one quarter of my monthly food allowance for mystery food the size of a bonbon?  Am I seriously expected to saw-away at miniscule forkful of make-believe food and pretend I’m really having dinner?


Such is ‘nouvelle cousine.’
I first heard of nouvelle cousine about 30 years ago and was certain – like punk rock and gangsta-rap –  it would eventually go away, but none of the aforementioned offenders have.  This means either I’m getting old or merely falling out-of-step with au currant style…


God forbid you should ask your waitron what the devil all that gibberish means on the menu you’re squinting to read – or pose a question during the oral-presentation of the nonsense dish of the day…  They’ll look down on you with that inimitable expression that says “I can smell cheeses you can’t even pronounce.”  There’s nothing worse than being snobbed-out by a 22 year old actor/waiter/model wannabee.   At least “tall food” with stupid rosemary sprigs poking-out your eyes has gone out of favor.


It comes down to this:  The economy is in the crapper and I want something to eat.  I don’t want to stop by a pizzeria and buy a slice to fill myself-up after a pricy meal – no matter who pays for it.  And if I wanted my dinner to look like a work of art, I’d have been born as a silverfish or a daddy long legs.  No wise cracks.  Once a meal is consumed and digested, it exits as gas and waste material flushed-down the toilet for a $55 entree – not including the price of the appetizer, beverages, desert, tax and gratuity.  It’s a damned good thing I like rice and beans.

3 thoughts on “World Hunger Begins in the Finest Restaurants”