The 1st Amendment of the United States Constitution clearly grants “the right of the people to peaceably assemble, and to petition the Government for a redress of grievances.” There is no provision therein giving any right to authorities to pepper-spray students protesting unaffordable increases in college tuition leading to a jobless future. Likewise there is no reasonable explanation for our police departments to confiscate tents and other property belonging protestors across the nation, let alone destroying their books, simply because protests look and smell messy to the privileged. What’s this country coming to? Fahrenheit 451?

Time and again officials mishandle protestors to the point of blatant abuse, and by doing-so further empower the very causes those authorities seek to diffuse. The depression we’re experiencing is only a depression if you’re one of the people sitting on the bottom rung of the ladder. The bottom rung of the ladder is a very vulnerable place to be.  Wealthy politicians wouldn’t know much about that.  Take for instance, Newt Gingrich, who completely missed the mark when he made comments directed at the disadvantaged at last night’s republican “morality forum” saying that protestors need to “Go get a job right after you take a bath!”  A job? What job? Where? There’s job somewhere? More importantly – what the fucking hell is Newt Gingrich doing at a MORALITY FORUM? – Aside from offering a sterling example of what morality doesn’t look-like…

I have no appetite for confrontation. Discord makes me sick to my stomach, but we’re in a current state of affairs where conflict and clashes are inevitable. The fuse has already been lit and the fires fanned by authroity figures who don’t think before they act or give orders.  For the ‘greatest generation’ today’s political and financial climate must feel like the great depression of the 1930’s – with banks running amok while wealthy ineffective congressmen fail to reach any kind of compromise to cure our nations financial ills. Instead, our congresspeople are attempting to deprive seniors of the Medicaid and Medicare they’ve come to rely upon – and paid into their entire lives.

To my generation it feels a bit like the Vietnam War protest days. It infuriates me how people never learn from history. Over the past decade neo-con wing-nuts have been doing everything in their power to remove history from school curriculum’s across the nation. It’s easier to deceive people when they have no idea of what has gone before.  The line drawn under the current math equals a dim prospect for the future of both the young and old alike – unless you’re wealthy enough to be insulated from the impending turmoil. The only coping mechanism is to petition your doctor to write a prescription covered by your health plan (providing you have one) for heavy sedatives and anti-depressants.  In light of all the suffering and inequity in this world, it’s curious to me how the republican party clings to the artifice of Christianity while doing everything possible to contradict Christian teachings.  Last I checked, greed and disdain for the needy were not embraced by Christ.  Christ would most assuredly have been among the 99 percent protestor and not feeding at the table of greed-mongers.

I think the dog and I need to go hide under the bed and hope we feel more hopeful in the morning. I’m at a loss to know what any of us can do to redirect the destructive winds of change – other than taking solace in the way forests burn only to make way for new life – but who the hell wants to be caught in the middle of a forest fire? 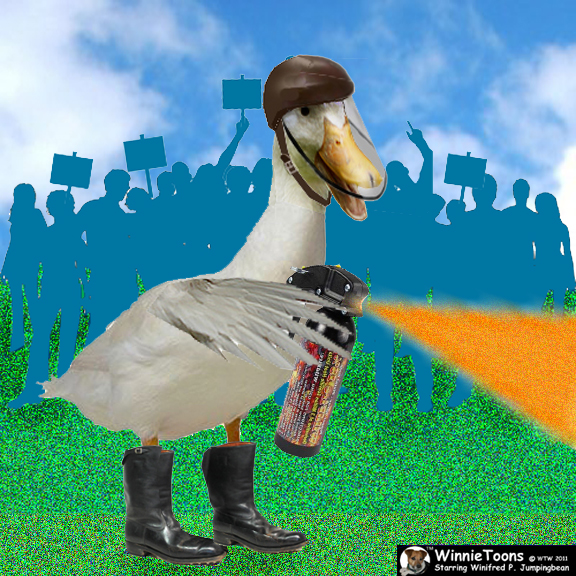 6 thoughts on “The Right of the People Peaceably to Assemble”