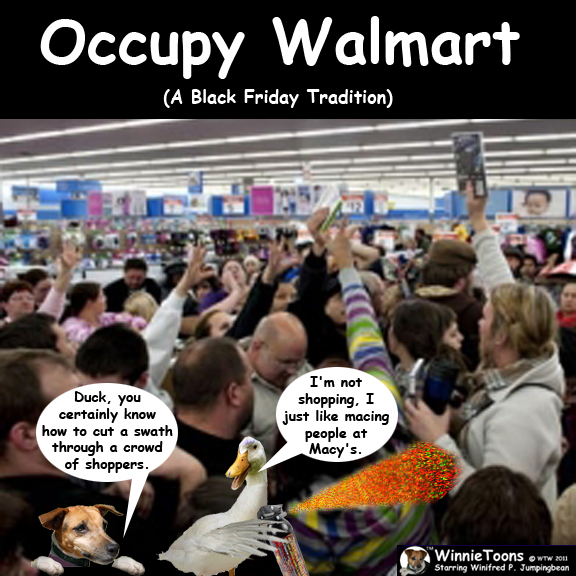 The Christmas holiday season is traditionally launched each year with someone being trampled to death as shoppers storm through the gates of Walmart – or by shooting someone in the kneecaps to get a parking space.  This year it’s pepper-spraying anyone who gets to the Nintendo game you plan to purchase for a loved one – even if it means temporarily choking or blinding another shopper to prevent them from getting to it first.

‘Black Friday’ is for crazy people.

No one with a modicum of common sense or decency goes anywhere near a retail outlet during the entire Christmas shopping season.  In fact the month-long block of time that begins with your first turkey-fart in the mob pressing itself against the doors outside the mall… up until the day after Christmas when everyone rushes to return the crap others have so thoughtfully gifted to one another – is an exercise in lost time.

NOTHING at all happens during the holy month of retail greed.  Try making a call to a work associate’s office at any point during the month of December, and generally you’ll find you’ll have to leave a message, because no one is answering the phones – even the secretaries are missing.  The whole block of time from Thanksgiving, through Christmas until the day after New Year’s is a akin to a vacation in the Bermuda Triangle.  Even Congress gets nothing done, but then again that’s not unusual…  Everyone you try to reach is unavailable because they’re frothing at the mouth in a zombie-like state of shopping-frenzy.

While I’m of no real religious affiliation, I have a certain admiration for the teachings of Christ, and from where I stand, the Christmas holidays have come to represent the diametric opposite of any and everything Christ stood for.  In point of fact, the religious Christian “right” are in complete opposition to everything Christ stood for.  Christ would have been trying to feed the poor and joining-in at the ‘Occupy Movement.’  He wouldn’t have been cheering record numbers of human executions in Texas or attempting to deport brown-skinned peoples, breaking-up families because not all of them were born in America.  Christ wouldn’t even be a republican for Christ’s sake…!!!

Jesus Christ most certainly wouldn’t be participating in ‘Black Friday.’  Odd how the launch of the shopping season of greed is called ‘Black Friday’ – and the day Christ was nailed to a cross to suffer and die an agonizing death is called ‘Good Friday.’  Is this fucked-up or is it all just my imagination?  Whichever it is, I’m going to once again do everything in my power to avoid as much of the Christmas holiday season as possible.

It’s my annual yuletide challenge – how much of Christmastime can I both ignore and endure all at once?  Whatever the madness is of this lost-time experience known as ‘Christmas’ – the war on Christmas isn’t coming from the people who say ‘Season’s Greetings’ – it’s a perversion coming from within the self-proclaimed faithful themselves. Everyone has lost all sight of faith, hope and charity.  If I’m not mistaken, Faith, Hope and Charity are all tearing at each others ratted-hair for the last ‘Fuck-Me-Up-Elmo’ on the shelves – or whatever other soon-to-be-abandoned waste of synthetic materials shoppers are willing to poke-out each others eyes to obtain for their loved ones.  I’d like to hibernate through the Christmas season until the ‘all-clear’ has been sounded.  Just wake me when it’s over.

5 thoughts on “What Would Christ Say About Black Friday?”