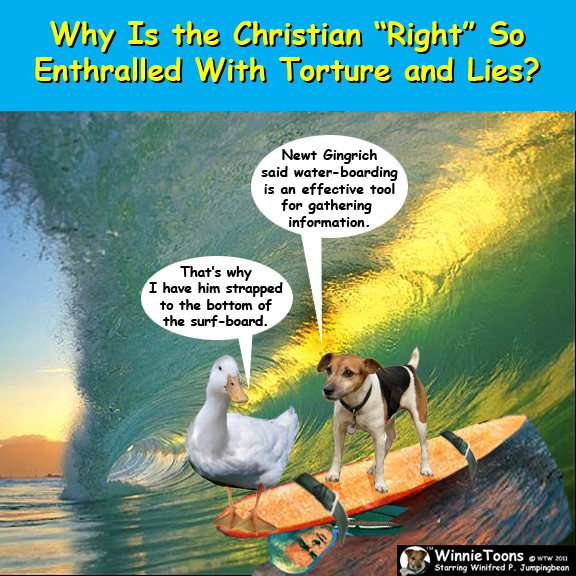 Why is the Christian Right-wing so enthralled with torture?  For that matter why are they so inclined to telling lies?  I’m on the sidelines here, as a person without religious affiliation, so I’d hope that would give me the perspective of one on the outside looking-in – but it doesn’t.  I don’t understand the blood-thirstiness of the Christian “right.”  Nor do I understand the glib little fibs they dish-up daily – whether it’s taking Obama’s words out of context or tap-dancing around around multiple marriages and secret mistresses.  This does not appear to be a very honorable line-up of candidates.

Michele Bachmann thinks nothing of making-up a story that is yet to be substantiated about a mother’s trauma upon learning her daughter became mentally retarded from being administered the HPV vaccine.  No one has yet to step forward and claim to be that parent – because there is no such person and no such incident ever took place.

Mitt Romney has been on all sides of every issue depending on whatever best suits his political aspirations at the time.  All the other GOP candidates from Cain to Santorum have endorsed what they like to politely call “enhanced interrogation techniques…”  Correct me if I’m wrong, but weren’t the countless numbers of people executed on a daily basis by the ancient Romans, an attempt to quash anyone who disagreed with their empire?  If memory serves me, Christ was one of those people tortured and killed to make a frightening example to deter others from following in his footsteps.  It doesn’t seem to have worked – but the cult does appear to have gotten way off track.  Whatever it is that makes the new faithful stray so far from the core values of the Prince of Peace is a complete mystery to me.

I find it stunning to watch GOP crowds cheering Rick Perry’s record number of death-sentences – even though some of these cases remain highly disputable as to the guilt of the people executed.  Currently I’m astonished that Newt Gingrich is in reach of becoming the GOP candidate especially in light of his reprehensible conduct over the past 30 years he’s been hawking his own convoluted world-view.  Now he’s touting water-boarding, as legal when he knows damned well the world community severely admonished Japan for using those same “techniques” during World War II. These acts are illegal in the eyes of the civilized world – and embracing them does not gain America the moral high-ground.

“Thou Shalt Not Lie” and “Thou Shalt Not Kill” are basic principals of Western religion, but I don’t see any signs that indicate it’s stopping anyone.  We might as well toss-in “Thou Shalt Not Steal” while we’re at it – covering only 3 of the 10 famous little guidelines, all of which are pretty easy to grasp.

Newt and the far-right took great glee in making fun of passive students at UC Davis being pepper-sprayed at close range not in accordance with how or when that kind of action is deemed necessary or appropriate.  There seems to be a streak of sadism in the collective perceptions of bible-belt Christians which is not at all becoming.  Doubtlessly all these Christian Republicans will exchange expensive gifts come Christmas, and weep over their chocolate bunnies come Easter.  Meanwhile it will never occur to them they ARE the modern Pontius Pilate’s – they’re the contemporary cruel Romans, and there should be no place for them in governing our country.

I wonder if spending too much time contemplating carved Crucifixes over church alters has somehow perverted the GOP moral compass?  Maybe they enjoy the suffering and pain of others.  It’s beyond the scope of my understanding.

6 thoughts on “Why Is the Christian Right So Enthralled With Torture and Lies?”