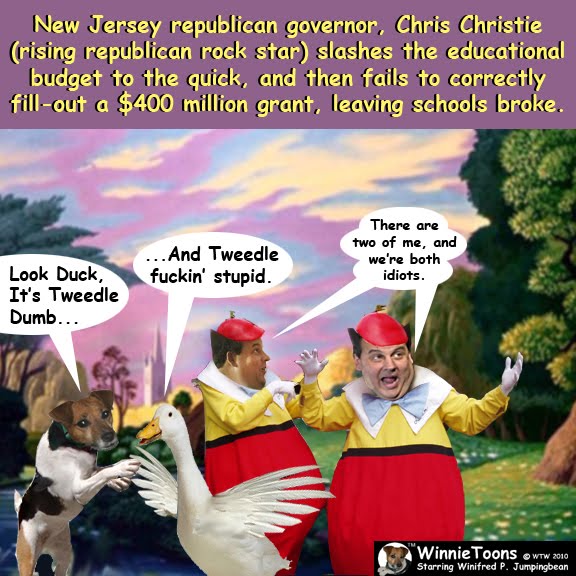 There are two Chris Christies – the one Michele Bachmann states publicly as a prime pick for the 2012 GOP presidential race.  The other Chris Christie is a spoiler who makes choices which will wreak havoc on the residents of New Jersey for years and years to come.  Christie, a former lobbyist, who’s had his name linked to various scandals involving his brother and shady financial dealings.  But this sort of thing is all so common-place in public “service”, that it‘s taken for granted.  Michele Bachmann recognized New Jersey Governor, Chris Christi as being a real right-wing team player.  In other words, he’s screwing-up big time, and that fits with Bachman’s own world view.  And any candidate or politician endorsed by Michele Bachann, you can pretty much count on as having the reasoning powers of a person recently kicked in the head by a horse. Christie’s incompetence in power was first lauded as “fiscal responsibility” when he slashed the budget for a variety of services in New Jersey ostensibly to balance the budget.  The most notable cuts came to the New Jersey school system — traditionally considered one of the best in the country.  He cut the budget to the quick, and then proceeded to fail to properly fill out government grant forms which would have qualified New Jersey for $500,000,000 which would have gone a long way to pick-up the education department’s financial shortfall — effectively leaving the New Jersey public school system, crippled.  Whatever anyone might think of me or my opinions, I am a product of the New Jersey public school system. I found when I went to college, I was head and shoulders above most of my contemporaries in all subjects — not because I‘m some kind of genius — but because I‘d had the advantage of a good, solid public school education.  Republicans may claim to be fiscally responsible (with their own ill-gotten gains) however, taxpayer dollars, should never be allowed near republican leaders…  But after all, a poorly educated electorate is a more easily manipulated electorate.

2 thoughts on “What Did Jersey Do to Deserve Chris Christie?”