‘The Young Gums’: Eric Cantor, Kevin McCarthy, Paul Ryan along with John Beohner Try to Re-grow a Third of Secondary Set of Teeth with a Newt-like “Contract ON America“ called “The Pledge to America”.  long on pizazz and short on fresh ideas.  Oh, for joy…More like a “Plague on America”. 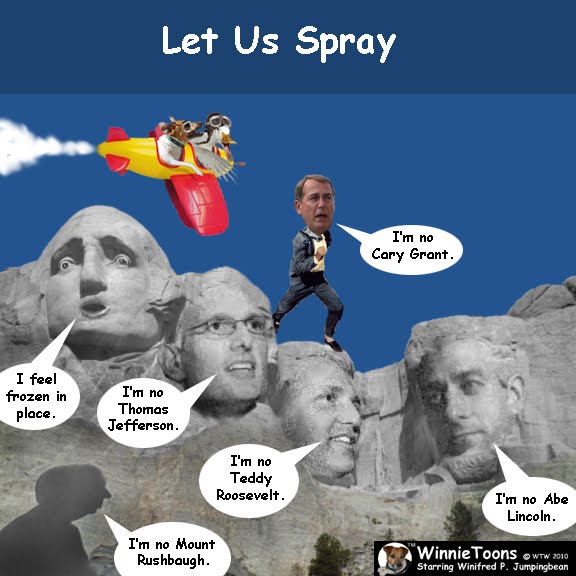 To quote the National Review: “The confidence that was placed in us was blown,” says Rep. Eric Cantor of Virginia, the House’s No. 2 Republican. “We are not under any illusion that this election is turning on the fact that people are pining for Republicans. We get that. It’s all against the other side.” But after four years in the political wilderness, [the pivotal 2 years of of which were on Bush’s watch setting the impossible challenges that faces Obama] - he says House Republicans have “learned from our mistakes,” and are ready to lead again.”.

Interpreting the mumbo-jumbo: “Young Guns” who are nowhere near young – but possibly gun-advocates with receding-gums and are trying to counter the ideas presented by the democratic/independent “Young Turks” countering their rivals with no ideas, only criticisms.

The ‘Turks’ while more media and information-driven, are actually young, bright, with new ideas and perspective criticizing BOTH sides of the aisle on how to change the downward spiral of this country.  But I’ll let them speak for themselves, if you visit their website at http://www.theyoungturks.com/. On the other hand,  the Young  Guns counter with the android-speak of the right-wing GOTP -[Grand Old Tea Party] with quicksilver concepts, too mercurial to decipher.

It’s easy to decry what is WRONG with the direction the country is drifting.  It’s difficult, however to stand by workable answers. The Young Gums are less than a decade away from receiving their dreaded AARP cards auto-addressed in the mail.  So what they REALLY are, is the last of the old guard aging ‘gracefully’ with a daily application of “Just for Men, and bronzer albeit it, badly.

Americans have to stop listening to the right-wing chanting the 18th century naïve physicians cry – “Bleeding, I shall made thee work yet!” – but what they propose to bleed is the already hemorrhaging middle-class, by repealing health care reform, giving Wall Street a renewed free hand, and extending the Bush tax breaks for the obscenely wealthy.  ‘The Guns’ parrot the same abysmal failed financial approaches that got us into the depressive mess we suffer today.  Don’t buy it voters…  It’s based on short-term greed for selfish benefits directed at a foolish populace easily won over with wedge issues and diversionary tactics.  The far right is hoping the November midterms will allow them to override the president – and repeal hard-won progressive reforms that actually get to the heart of our long term problems.  And it’s a painful, but necessary path.

This president has set us on the right course – But Impatient voters are just not feeling the benefits yet.  That creates an atmosphere for an uneasy, ‘soft’ populace ready to jump ship, with the ease it takes to change TV channels on their remotes.

History repeats itself, be it a rapid fire stutter, or a long term revival of past mistakes.  It took decades of incompetent judgment to get us in to the soup we’re boiling-in today – lulled into complacently all the while it was happening.  Low-information voters look no further than their noses. Fixing our financial crisis is bound to impact us all.  The great crash of 1929  (now think 2009) didn’t make the populace desperate with panic until 1932/1933.  Is this Obama’s fault?  No, but it has become his responsibility, and we’re not at 2011 yet…

History replays like a broken record.  And those who refuse to heed it’s lessons are doomed to repeat them.  Like the Caesars using ‘bread and circuses’ to divert attention away from the problems of the populace – The Aging Gums are merely greedy politicians in the pocket of the corporations – willing to implement a ’Middle-class Bataan Death March’ toward a failed past.  Their deal is to divert American attentions back to watching second-tier celebrities in bikinis eating earthworms on TV in  non-reality reality shows – or worse, Bristol Palin showing-off her piano legs on ’Dancing with the Stars’… then we’re supposed to visit the local shopping mall depleting our meager savings on useless crap made by political prisoners in China while our own workers stand in soup lines, waiting for unemployment checks.

Remember, the corporations, through the banks we, were rescued by tax-payers.  Those corporations have turned their backs on American workers for cheaper labor in the east, who work at such “reasonable” rates.

Remember when, Bush in his idiotic flight suit announcing “Mission Accomplished” while stumble-bumbling us into 2 wars that equals the time and exceeded the treasure of WWI and WWII combined.  That is where the vast majority of our national wealth was squandered, exacerbated by decades-old corrupt corporate oversight, allowing the FOX to tend to the hen-house.  What the GOTP doesn’t like about Obama, is he understands both the political gains and the downside games.

Does any THINKING person really want John Boehner, Paul Ryan, with THE ironically named Kevin McCARTHY and 40 toothed Eric Cantor weeviling us back to another false economic bubble? AND touting Boehner at the helm?  Perhaps you do.  But be careful what you wish for…And NEVER listen to Rush Mount Limbaugh instead, watch and old Hitchock film.  They’re scary enough, but no where near as frightening as our own potential future under the republicans working to confound our president at every turn.  Young Guns are trotting out their “new ideas” in a Plague on America – now THAT is change we can bereave-in.

2 thoughts on “Change You Can Bereave In”