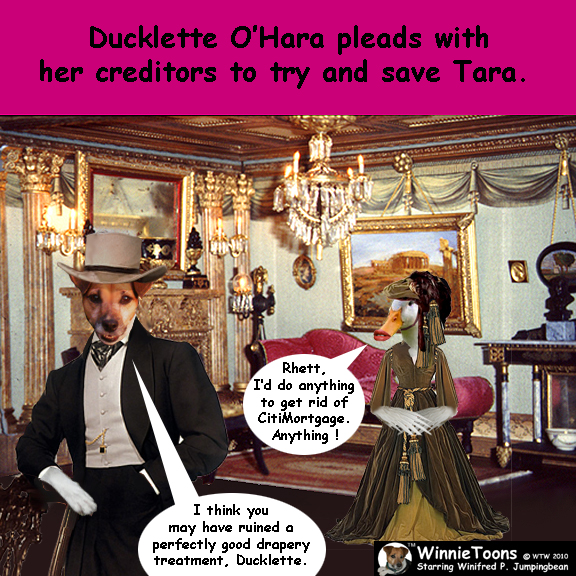 I have become fond of the term “fiduciary treason” - I don’t know if anyone else is using it, but I certainly am.  Banking institutions have, through avarice and greed, nearly brought about the total collapse of our nation – while taking taxpayer bailouts and sending jobs overseas.

CitiGroup is one such fine example. 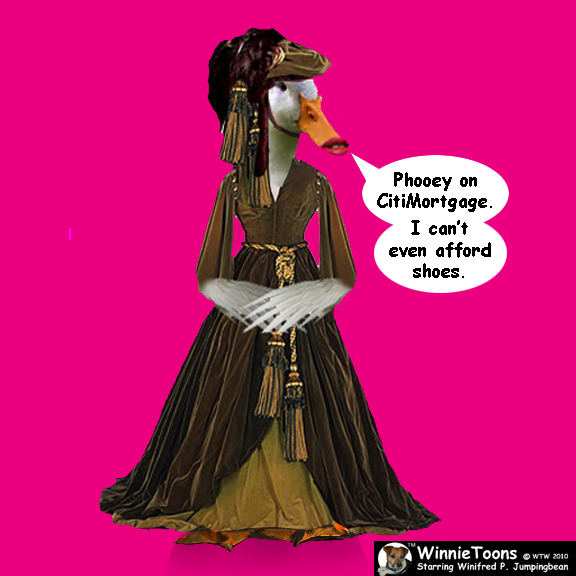 Close to a year ago I renegotiated my mortgage with CitiMortgage and supplied them will all the documentation they required and met all the terms.  I went through a law firm to represent me, as I wasn’t having anymore nightmare transactions with these mortgage criminals person to person.  I was one of those people who refinanced my mortgage shortly after 9/11 when the economy first started lagging, so I could pay off debt.  I went from a $500 monthly mortgage payment to a frightening $900 a month — only to discover after closing I was really saddled with a minimum payment of $1500 per month.  They sure saw me coming.

As President Obama continued the bank bailouts, initiated by the out-going Bush Administration, but at the same time among the programs he attempted to institute was a ‘Save My House Program’ to help people exactly like me, who’d been swindled and hosed by the greedy crooks who inflated the housing bubble.

I’m now finding that my modification was never actually processed by CitiMortgage, and initially they even denied having ever received any of my checks.  They now acknowledge it (after faxing them copies of all my canceled checks) that they did indeed receive my payments – but failed to initially apply them to my account.  All of this adds up to my finding myself in foreclosure.  I’m now a merry member of the ‘one-in-seven’ club of American homeowner’s in foreclosure.  And I don’t think this is any coincidence – even after we, the taxpayers bailed out giants like CitiGroup – it remains in their greedy financial best interests to see the Obama program fail.  In fact to see all Obama programs fail. It’s merely one more tool in the republican arsenal to create a perception of failure directed at the President of the United States.

CitiGroup is the last of the Wall Street Giants to pull themselves out of the stew they helped brew.  The government (aka, We the People) still own 17% of CitiGroup’s stock.  And “talent” as Wall Street likes to call it, are leaving CitiGroup in droves, as more greedy slices of the capitol-pie are being served up elsewhere in the financial sector.

How has CitiGroup responded?  BY GIVING OUT ENORMOUS BONUSES TO THEIR TOP EXECUTIVES.  Sorry, I must have accidentally hit the capitAl lock during that last sentence.

I have found CitiMortgage to be the most arrogant, incompetent cadre of stumble-bums ever to stakeout the earth.  After failing to initially apply my mortgage checks to my account, or process a re-negotiation that began in 2009, they’re  now sending me letters of intent to foreclose because they have neglected to do anything they were supposed to do.

Now I’m in the hands of lawyers with no sense of security about the roof over my head.  And let me tell you, it’s not a fun place to be – 60 years old, out of work, and facing the potential loss of the only real financial asset I’ve ever had.  So how’s that ‘tinkle-down’ economics workin’ for ‘ya?  Not too good from where I stand.

2 thoughts on “So Where does Ducklette O’Hara Turn Next?”