Today’s idea was sent to me by way of  Carleen (in a viral email quoted below the Astrix’). 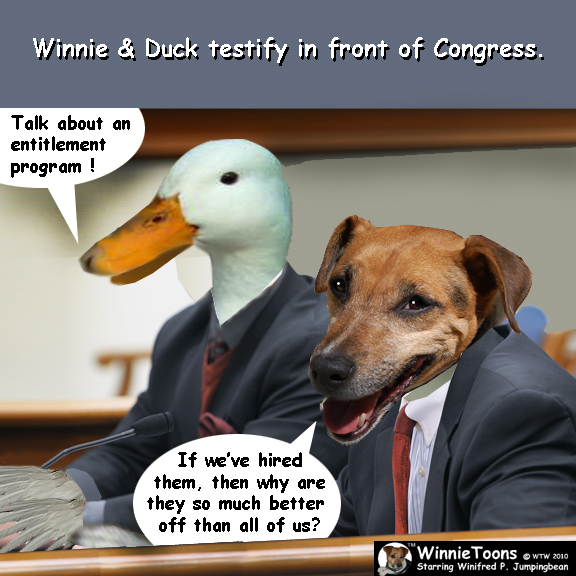 If celebrities can testify before congress, why not Winnie and Duck?  Stephen Colbert, (who I personally adore) may have been too obscure in his rightful and timely message about finding a humane solution for the “least of our brothers” in the illegal immigration debate.  I understood him – but most of our elected officials are either non-truthful, blatantly stupid and/or owned by special interests – none of which coincide with OUR very special interests as beleaguered American citizens .
AND yesterday’s “lecture” to congress by Arnold Schwarzenegger against the special interest lobbyists representing big oil and the factual distortions of the Koch Brother’s (AKA the astronomically wealthy funding-family paying for the AstroTurf carpeting the Tea Party base) — gained him, in my humble eyes, a whole new respect.
Below is something that genuinely confronts the REAL dangers of Big Government.   Not the idiocy coming from the far-right neo-cons.  Read further:
*   *   *   *   *
Instead of changing amendments that take back peoples’ rights, how about something that limits what congress gives themselves.  This should make for interesting debate in congress…

Governors of 35 states have already filed Suit against the Federal Government for imposing unlawful burdens upon them.
It only takes 38 (of the 50) States to convene a Constitutional Convention. This will take less than thirty seconds to read.   If you agree, please pass it on. An idea whose time has come!  For too long we have been too complacent about the workings of Congress. Many citizens had no idea that members of Congress could retire with the same pay after only one term, that they specifically exempted themselves from many of the laws they have passed (such as being exempt from any fear of prosecution for sexual harassment) while ordinary citizens must live under those laws. The latest was to exempt themselves from the Healthcare Reform … in all of its forms. Somehow, that doesn’t seem logical. We do not have an elite that is above the law.  I truly don’t care if they are  Democrat, Republican, Independent or whatever.  The self-serving must stop.

A Constitutional Convention – this is a good way to do that. It is an idea whose time has come.  I’m asking each addressee to forward this Email to a minimum of ten people on their Address list; in turn ask each of those to do likewise.  In three days, most people in The United States of America will have read this message. This is one proposal that really should be passed around.
***Proposed 28th Amendment to the  United States Constitution***