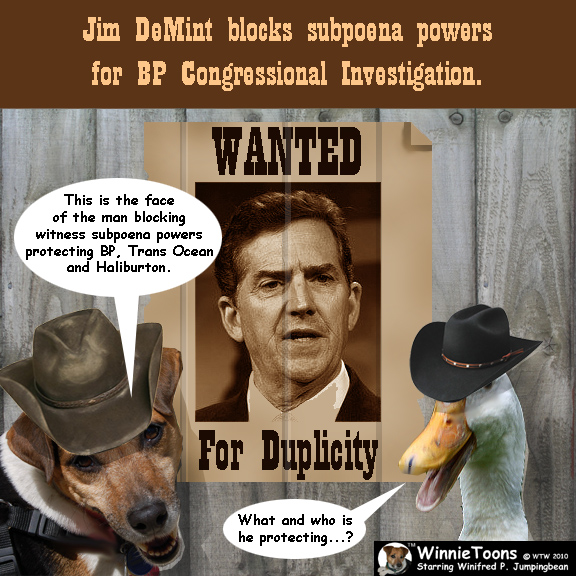 This shouldn’t take long.  Most Americans have no idea who Jim DeMint is.  Jim DeMint is the man currently posturing to take-over the shambles that passes itself off as the GOTP (a.k.a. The Grand Old Party with a spot of TEA).  The Republican’s are postured to take over the house in the midterms and possibly even the senate.  This will be a disaster for getting the work of the American people to move forward.  Can you say ‘Gridlock?’  Sure you can.

Senator DeMint is the new DeMented face of evil.  He’s out-distanced Karl Rove and Newt Gingrich combined when it comes to self-serving duplicitous conduct counter to the best interests of the Americans taxpayer.  DeMint, a senator from South Carolina, has thrown body blocks in the path of health care for 9/11 First Responders, championed idiotic candidates like Delaware’s Christine (Pristine) O’ Donnell, holds close political ties to Sarah Palin — and his latest shameful conduct it to throw out a measure forcing a stand-still on allowing the Congressional Investigation Committee to proceed without being able to subpoena witnesses under oath when testifying about the Deep Water BP oil spill disaster in the gulf.

To what end?  Who is he protecting?  Certainly not the American people or the fragile ecosystem.  He’s clearly not on the side of the families of the 11 dead rig-workers, or the countless lives and business harmed forever by this man-made calamity.  The house of representatives FINALLY did pass the 9/11 First Responders Bill – but it still has to make it’s way to the senate where all congressional-constipation really stalls in it’s tracks.  And the demented Jim DeMint is that face of that and many other political bowel obstructions.

If any American has a single doubt as to why he or she shouldn’t pull a Republican/Tea Party leaver this November, Jim DeMint is the reason.  NO work will get done in Congress.- we’ll be mired in fantasy nonsense with impeachment allegations being leveled at Obama as to whether he was actually born in Hawaii.  (He was, get over it).  This will not help our economy.  This will not extract us from the wrongful wars the Republicans led us into.  This will not move our country forward.  And therein lies the plan.  Block Obama’s entire agenda so low information voters will think he’s ineffective, and return the reigns of power to the very Republicans who screwed us in the first place.

Now ask yourself:  “Why would Jim DeMint not want to block witnesses from testifying under oath at the BP hearings?”  It doesn’t take a degree in rocket science to patch that answer together.