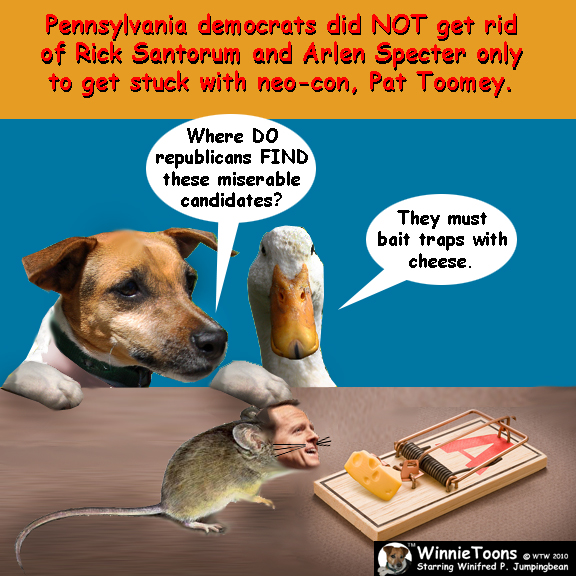 Pat Toomey is the last thing Pennsylvania needs – a bigoted, backward thinking Wall Streeter who sends jobs overseas.  And those are the very nicest things I can come up with to say about him.  He’s making false, unsubstantiated statements about Joe Sestak’s voting record in clear hopes no one will search the records.  He’s the master of the toxic, false sound bite – the new way of doing political dirty business.

Toomey is anti-abortion to the point where he has actually suggested pushing for the repeal of Roe v Wade, suggesting the retroactive arrest and imprisonment of physicians who performed legal procedures even while this is the ‘rule of law’ of the land.  These comments are unarguably radical and unconstitutional.

Toomey is the classic opportunist who will most certainly abuse  power if allowed to serve in the senate.  The most outstanding thing on his resume is his experience abroad working in Hong Kong advancing the economy of China at the expense of American jobs.

If you’re looking for a reason to vote for Joe Sestak, all you need to know, is he’s the complete polar opposite of Toomey — on all the issues from social, to international, to financial.  I missed the debates while they were happening in real time, (I had prior volunteer commitments working with law students and faculty at Penn, who are in turn helping me with my legal issues.)  So I watched the debates online after the fact — stopping and analyzing my gut reactions to answers and rebuttals from both.

My consistent observation with Toomey’s performance was a lackluster preparedness when he answered questions regarding national security.  Especially with regard to the Middle East. Toomey’s eyes evaded the camera, and his words were fumbled as if taken off guard in unfamiliar territory.  These are my own visceral responses, and I’ve learned to trust my gut.  Joe Sestak was on far firmer ground on these issues, having just been in the Pentagon minutes prior to the 9/11 strikes resulting in his loosing close friends and colleagues.  Sestak has served on the National Security Advisory Committee and on the soil of the conflicts in the Middle East.  His answers as to why a preemptive strike against a nuclear Iran were thoughtful, considered and in his words “potentially disastrous”.  Words coming from a place of wisdom and experience.  We already have 2 costly failing Middle Eastern wars under our belt not counting the tensions in Israel – even with the face-saving withdrawal from Iraq.

The uneasy “peace” following our withdrawal from Iraq can hardly count as a victory.  Toomey faked his way through those Mideast questions, failing to make cohesive arguments while pandering to hawks and low-information white supremacist reactionaries — even as he attempted to assuage Jewish voters.  It’s a hard road to whore – and way out of his political range.  You can’t have it both ways.  Pat Toomey would be a disaster for Pennsylvania.  We don’t need a bigoted, backward thinking Wall Streeter/lobbyist who sends jobs overseas.  We need a man with experience in these crucial days.  America is in trouble, and greed is not the answer.

When Sestak was asked what was the most threatening force facing our national security, without missing a beat, he said “the economy.”  Not the wars.  But they are not mutually exclusive issues.

Who do you trust on military strategy and national security?  A usurer who’s devoted his life to amassing embarrassing wealth?  Or an admiral who has seen war and considers it the most desperate last resort?  At the risk of being obvious, war ends lives, innocent and otherwise – and destroys the infrastructure of nations.  You think you’ve got it bad with a sparse economy, you know nothin’…  try going through all you’re experiencing now, only with bombs over head.  That’s the obvious reason why peaceful solutions have to be the voice of reason.

Aside from misconstrued “factoids and allegations,” Toomey’s performance was mediocre and ill-prepared peppered with hinted underpinnings of greed-motivations – a.k.a. “business as usual“.  I urge you to watch the Sestak/Toomey debate online, and defy you not to see the stark difference between a squirrelly opportunist, and a genuine military man of courage who believes war is the last resort in a volatile world.  We need a leader who recognizes the power of diplomacy and embargoes before lobbing reactionary bombs.  Two failed wars and a hemorrhaging economy are enough for American to straighten out at one time.  Sanity must be held in higher esteem.  The world depends on it, and Pennsylvania carries the burden of placing one more sane piece in the puzzle of fairness and responsible wisdom.  To hell with knee-jerk thinking.

Who do you trust on military strategy?  A usurer who’s benefited from international unrest?  Or the alternative?  Pennsylvanians, VOTE Joe Sestak for Senate on November 2nd.  He cleans up after his dog, according to his TV ad (I appreciate that).  I have every confidence he can clean-up Toomey’s messes too.

5 thoughts on “Sestak is Thankfully Gaining on Toomey”