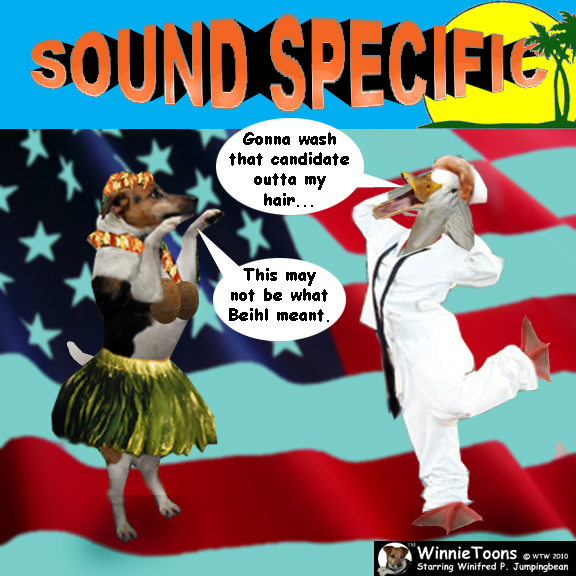 Sound specific.  Is that too much to ask?  None of the candidates have campaigned on specifics. Most of the candidates from all conceivable fractured directions are avoiding any specifics on how to restore the economy.  The only one with a plan is the president, but he’s not running at least for himself – and his own party has left him out to dry.  The reason being, there are no easy, painless answers to jobs and the economy.  We’re in for a long haul.

Specifics in a campaign become a matter of record, and no candidate wants to run on recorded specifics when you can use wedge issues, smoke screens and hide away from the press in an undisclosed location.

That’s because none of them have any answers.  Especially the Tea Party republicans who are entirely about directing the misdirected energy toward republican regaining power in 1012 — not in doing the people’s business.

Republicans and Tea Party clones chant on about smaller government and lower taxes – neither of which are valid plans, they’re sound-bites.  The fundamental need is a combination of things starting with allowing the Bush tax-cuts for the wealthy to lapse, returning them to the level they were back during the Regan years – or lower.  The money in this country is so dreadfully off-balance, with 2% of the nation controlling 87% of the wealth.  Most average Americans are completely unaware they’re actually GETTING a tax cut.  Only people earning over a QUARTER MILLION per year are facing tax hikes.  But all people need to hear is the words “raising taxes” (even though it doesn’t apply to them) and they’re all in a lather.

People who don’t like health care reform fail to understand it, much as voters initially failed to understand Social Security when it was first passed.  The money you and your employer pay to insurance companies, does not in large part go to pay for your health issues, your doctor’s services or your hospital.  It goes to insurance company shareholders – the same top 2% who already have every spare penny in this country in lock-down.

Democrats need to get voters to understand how and where monies are best spent and which legislative changes are the correct fixes for the economy.  It’s a hard sell, because the benefits are not yet felt by the voting public.

Republicans need to stop leveraging wedge issues and “man-up” if you will, about how they’re in the back pocket of corporations and banks — their time-honored plan is to attack opponents with half-truths and blatant lies, drawing attention away from the realities by boonswaggling voters into believing gay rights, Muslims, immigrants or abortion are the real issues.  They aren’t.  The real issue is the imbalance of wealth in this country and how to level the playing field to restore the middle class.  Republicans stand for extending tax cuts for the wealthy, bleeding the middle class dry, out-sourcing jobs and taking us back to the days of George W. Bush.  Do you think for a minute the Republican Party is going to go on record as stating how they, and their own cronies need loosen their tightened fists off their bulging purses and put greed aside.  Not gonna happen.

Voters were already fooled once by the Bush Administration.  To quote the “master” himself:

‘Wash those neo-cons right out of your hair and send them on their way’ — at the voting booth this coming Tuesday…  Rain or shine.