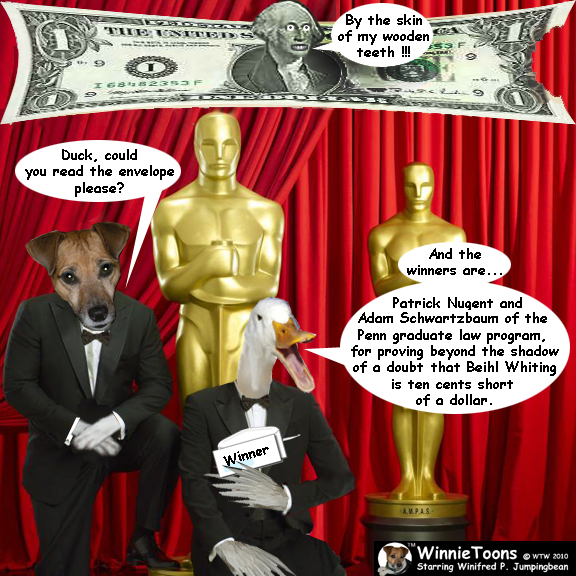 I’m in a much cheerier mood today.

I missed posting a WinnieToon yesterday because I was so depressed I could hardly get out of bed except when forced to run errends delivering legal documents back and forth from one end of town to the other to determine my fate.  Every email I receive, every phone call, every letter that comes through my mail-slot are depressing harbingers of my eminent decline.  Being the subject of three simultaneous law suits is no barrel of laughs, especially when one of them hinges on whether or not I’ll be able to keep my home of 27 years.

A little better than a year and a half ago, I was fit, slim, happy — looking and feeling younger than my actual years.  Sure I had some aches and pains, and money was tight.  But money being tight is one of the prerequisites of being an artist – you get used to it and adapt.  The aches and pains turned out to me more, cascading me into a physical decline that led to the loss of my income when my job denied me “reasonable accommodation in the workplace” following a gradual shoulder injury that led to surgery.  Surgery which was only necessary as it was a result of repeated and unreasonable physical strain brought on by my job above what my contract determined I was required to do.

I was renegotiating my mortgage through all the above confusion, as well as caring for a declining parent — And have since found-out all sorts of horrors, like my mortgage had an “ARM” of which I was completely UNAWARE.  ALL discussions with mortgage brokers were about FIXED interest rates ONLY, but some kind of mortgage shenanigans took place, right under my nose — and without ever missing a single mortgage payment, I found myself in foreclosure about a year later.  My last mortgage payment was refused by the lender and returned.  a “reconciliation” court date is set for right before Christmas.  “Reconsilliation” – sounds so romantic, doesn’t it?  In reality it promises to be a real trip down Rabbit Hole Lane.

Meanwhile In a parallel universe, I was denied my unemployment benefits 2 months ago because of monetizing my WinnieToons blog.  On paper (in a paperless society) WinnieToons earned about $250 before Big Brother Google decided my blog was a hotbed of suspicious activity and UNmonetized me without ever offering any explanation — or a means whereby I could actually TALK to a living human being to get to the bottom of the problem.  I have lived for the past 2 months devoid of ANY income whatsoever.  In reality WinnieToons only earned a whopping ninety cents – ten cents short of a dollar.  That was the test-amount Google deposited in my account, and never a penny since.  In essence, I lost my unemployment benefits for earning ninety cents and being honest enough to report it to the state.  I am allowed to earn $150 per week above my unemployment without it effecting my unemployment.  WinnieToons was “enjoying” about $35 a week in Google’s pretend “play” money before all incoming monies were shut down.

Enter two University of Pennsylvania Law School graduate students, Adam Schwartzbaum and Pat Nugent.  Pat and Adam did research on my case and Pat appeared with me in the presence of a mediator in a public court building on Springarden Avenue.

It was argued that I had a pre-existing EIN number (employee identification number) which by virtue of my having applied for it well prior to loosing my job and used to monetize the blog — so I was entitled to be reinstated under the states own statutes.  I notified them of the EIN number when I first applied for unemployment. Most of the people you talk with at unemployment know even less than the confused callers begging for clarification.  As it turns out, I am in fact allowed to have a monetized blog so long as I report my earnings.  The mediator seemed sensitive to the situation and reasonable…

…but on Wednesday of this past week I received a letter which I interpreted to mean my appeal had been declined. Legalese is a language derived from pig-Latin and can only be read backwards in special mirrors and translated into Aramaic to be interpreted by a sibyl with a Ouija-board.  This misinterpretation was further confused by the copy-store clerk who I entrusted to fax the letter over to the Penn students, didn’t notice that page one was double-sided.  Truth to tell, neither did I.  On the back of page one were the much-anticipated words that reinstated me.  Page one and three read back to back without the benefit of page two have an entirely different and grim message.  Everything has since been properly deciphered.  this means I have a huge check due me, with great thanks to Pat and Adam without whom, I’d have laid down on railroad tracks and given up.

This was Pat’s first time arguing a case for a client, and he won.  That bodes well for his future in law.  I need to have them all over for a glass of wine just to thank them.  Observing the unemployment ritual was another student who’s name escapes me, (and I hope he will forgive my senior moment), but I do recall that he had a bit part in the film “Mean Girls” starring Lindsay Lohan.  He is invited over for a glass of wine.  Lindasy Lohan is not.  I’m not taking the fall for her next relapse.

To wrap things-up, I was defended by two graduate law students who proved to the State of Pennsylvania that I was beyond a shadow of a doubt, ten cents short of a dollar.

I could have told them that myself. Do I have a witness?  Amen.

3 thoughts on “Ten Cents a Dance”