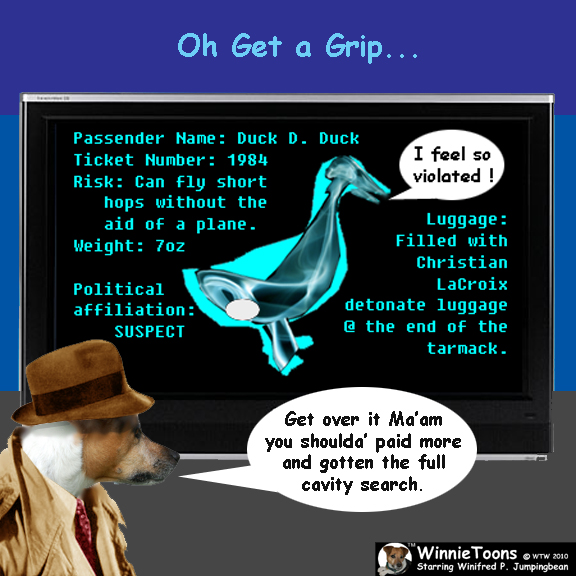 Oh for the Love of Pete.

Who gives a rat’s ass what you look like in an airline scan monitor?

Is our collective ego so insecure that we value genital privacy over life and safety?  Sure, no one wants their children groped.  But no normal person straps explosives to their children…  or their grandmother for that matter.  What we’re screening-for is abnormal people who are perfectly capable of looking just like anyone else.

YEARS and years ago, a friend named David Lortz drove me from Rochester, New York to Toronto, Canada so I could exhibit a dollhouse I’d completed (now in a museum collection.)  I had secured a prime exhibit location at a gallery across the street from the Royal Ontario Museum in time for the Christmas holidays.  But in the weeks before transporting the dollhouse, I had nightmares about delivering the miniature to Canada.  It was during those drug-infested Vietnam War days of hippie paranoia.  I worried that my dollhouse was going to be torn to pieces by Canadian customs agents looking for marijuana hidden in the dollhouse or in some of it’s packed contents.  In my nightmare all my hard-work would be destroyed by a bogus destruction of my treasured project by a search for non-existent contraband.

I voiced my psychic-night-terrors to David, who while shaking his shoulder length hair from his face assured me he would not be carrying any drugs.  “lotsa people with long hair cross the Canadian border everyday.” he told me.  “It’ll be cool.”

But I was a born worrier.

David was the only one I knew who had a van, and my late lover Danny had set-up the transport for me — telling me to stop being so “un-cool”.  “Cool” had more meaning then.  No one had discovered “awesome.”  I’ve always worried too much.  I come by it honestly through Grandma Betty.

On the date of the transport I sat nervously awaiting David’s arrival so I could pack my precious project into his van for exhibition in Toronto.  When he actually showed-up, (late) I was surprised to see his mother sitting in the passenger’s seat of the van.  I was told I would have to ride in back and secure the dollhouse on the floor so it didn’t bump-around.  His mother had decided on a whim to join us and have a day-trip to visit an older widow she knew on the other side of Lake Ontario.  I was relieved seeing her in a blue pillbox hat and matching nubby Chanel-ish suit.  She drove David crazy on the whole trip up.  She gave him grief about his hair, his girlfriend, what he was going to do with his life, and on and on and on…

It calmed my nerves to see this domestic clash of generations, as it was the same experience I had whenever I visited my parents, Bob and Grandma Betty.  I could never do anything right in Grandma Betty’s eyes, or if I did, I never did-so standing-up straight.  I recognized the drama, and was relieved to be spared the cross-hairs of the critique.

When we reached the Canadian border I’d reached a quiet fantasy-neurosis that I was a Vietnam draft dodger-come interloper escaping the country.  After all, I was riding on the floor sitting Injun-style with my legs falling asleep feeling every bump and dip in the road.

Reaching the border, the crossing-guards waived us through barely glancing at anything, let alone me.  They asked how many occupants were in the car, and the length of our visit and it so was done.  Away we drove.

When we got to Toronto, Dave’s mother pulled-out the bricks of hash she was hiding under her skirt, gave them to David, who delivered them to a head-shop on Yonge Street, then dropping her off to visit her friend.  In my own stupid disbelief, he then delivered me and my dollhouse to the Stanley Wagman Gallery across the street from the Royal Canadian Museum.

The moral of my story is, be an exhibitionist for the cameras, and insist on a cavity search too.  It might just be the high-point of your day.

4 thoughts on “To Screen or Not to Screen…?”