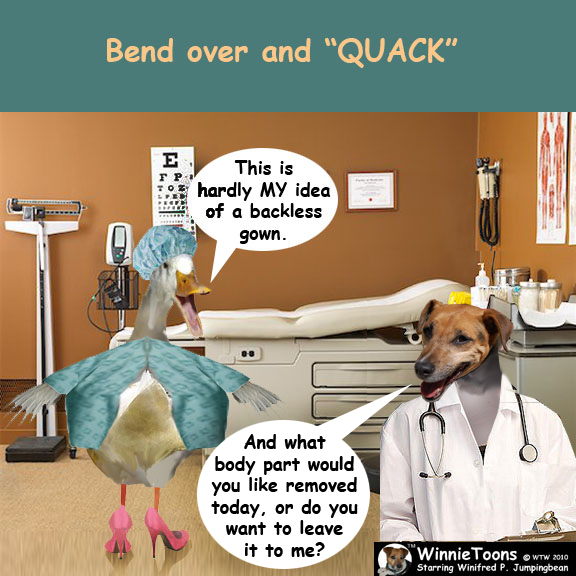 I have several doctor’s appointments next week, (personal things).  And as a member in good standing of America’s recently unemployed, I’ve struggled to keep my COBRA up to date, holding my breath as to what to do about my medical coverage when it runs-out, if things don‘t start looking-up for me.  Health care reform doesn’t kick-in until 2014, (without a public option) baring in mind the republicans might still try to squash what little progress has been made.

Then along comes great-braying ass, Republican Representative-elect Andrew Harris of Maryland to point-out how out-of-touch he and his whole party ARE, and have been.  Last week Harris showed his true colors when he voiced his outrage that his personal federal health insurance wouldn’t kick-in for a month.  Benefits for new members of congress don’t take effect until AFTER they’re sworn-in.  Herr Docktor Harris is a board-certified medical doctor, who ran on a platform of opposing and repealing health care reform.  He’s un-phased by the fact that obscene wealth by way of premiums disappear into the black hole known as the insurance industry.  The lion’s share of insurance monies going neither to patients in need nor to health care providers — but rather to shareholders and executives who make unfathomable profits from people‘s natural desire to stay alive.  Heartless capitalist greed at it’s finest.

I live in a Philadelphia neighborhood that’s surrounded by teaching hospitals – historic Pennsylvania Hospital, and Jefferson Hospital & Medical College.  I’ve often heard it said there are two types of people who go into medicine: those who have a strong desire to help heal people, and those who merely want to get rich.  Doctors do well these days but not the way they once did.  All the real money is in being made by the middleman sponges in-between.

Harris, who is newly elected to congress must be the variety who sought wealth.  After all, he jumped-ship from medicine to politics to defend the world’s most ineffective and corrupt money-laundering scheme – the American health insurance industry.

Harris, in full earshot of 100 plus people at congress’ freshman orientation is quoted as saying: “This is the only employer I’ve ever worked for where you don’t get coverage the first day you are employed.”

Most employers don’t allow health care to kick-in until after 2 or 3 months on the job, and even then people are faced with opting for the least expensive plans if they want to see any earnings leftover in their paychecks.  This flap from Harris should not be overlooked.  He, like so many who enjoy lives of privilege, resent meager entitlements that merely define society’s human decency.

We don’t have the best health care in the world.  We have the best physicians and hospitals — with the most effective Ponzi-scheme running interference between the patient the their doctor.  A vast number of Americans fail to wrap their minds around this and confuse health care providers with insurance parasites.  I would like nothing more than to see Dr Harris’ Hippocratic Oath exposed for the hypocrisy it really is.

And lest we forget the pharmaceutical industry.  “Take 2 Extra strength Alieve and be pain free all day” – but don’t be surprised if you find yourself with lymphocystic colitis (a more virulent form of IBS) that never quite goes away.  A physician recommended both Naproxen and Ibuprofen for the pain I endured when I tore my rotator-cuff lifting oddly-weighted objects at my former job.  I alternated the products as directed, which in turn ate-away at the lining of my stomach effectively leaving me incontinent — leading to more and more medication (including steroids from the prednisone family) – all but destroying my quality of life.  Don’t take either Advil or Alieve for periods longer than a few days.  Just ask me, I’m living the damage first-hand.  Both Advil and Alieve are BIG money-makers that every decent pharmacist in the world will tell you should be by short-term prescription ONLY.  The best way to control pain is to rise above it, and forget western medicine.  It’s about the bottom line, and not the lining leading to your bottom.

As we all know, Capitalism wins.  Doesn’t matter if it’s making dangerous medicines available over the counter or turning people’s natural desire for they and their loved ones to live a disease-free life — not when there’s BIG money to be made!

Switching gears (ever-so-slightly) I live between 2 major hospitals, but my old medical plan sent me to a hospital nowhere near where I live.  Long before health care reform, I was already being dictated-to by my insurance company.  So dutifully, I went to my inconveniently located hospital about fifteen years ago for a full, routine physical.

When I arrived, I learned my doctor’s office was flooded by a broken waste pipe — but not to worry — appointments were being “doubled-up” in an office on the ground floor of the medical building across the street.  I trekked across the street to the temporary location and signed-in.  I was guided toward a make-shift changing room where I handed-over my clothes to a nurse who promised to lock-them-up for me and would return with a little locker key on a wrist band.  She gave me a backless medical gown to put-on, and I was shown to a conference room temporarily serving as an examination area.  She neatly pulled a long sheet of disposable paper down the length of the gigantic oval table instructing me to lie-down, telling me the doctor would be right with me — and she would return shortly with my keys.  I also got a little “airline-sized” mini-pillow for under my head.

I kept waiting for my key, but she never come back…

I waited and waited…

…and waited some more .  It was very chilly in the conference room and not terribly comfortable on the hard teak tabletop.  But I waited patiently wishing I had a magazine or something to pass the time.  Instead I mentally redecorated the room, putting up an imaginary chair rail, changing the drapery treatments and lighting fixtures until I focused on a stain on the acoustical tile ceiling.  It looked a little like my home state of New Jersey as my eyelids grew heavy with boredom…  Granted, these were unusual circumstances, but WHY do doctors offices ALWAYS overbook as if the patient’s time has no value?

Eventually I started cat-napping, waking-up whenever I heard footsteps anywhere near the door.  But no one knocked, so I drifted back to sleep only to awaken abruptly to find myself surrounded by foreign exchange students, some of whom were wearing turbans and scrubs, and all of whom were taking notes presumably about me.  I actually screamed out loud when I realized I was THE all but stark-naked center-piece in the middle of a table surrounded by at least sixteen students.  I jumped-up grabbing the paper strip behind me and ran down the hallway clutching the paper runner to hide my backside.  Even Princess Diana’s wedding gown didn’t have a train as long as mine.

The hallway led me to the main-lobby waiting room filled to capacity with people wearing normal clothes and plus ME – the one irate crazy -man screaming at the top of my lungs demanding my clothes back.

“Oh Mr Whiting, there you are.” the nurse-receptionist said “We’ve been looking everywhere for you.”  Amber’s shift was over and she must have left for the day without telling anyone where she’d placed you.“

I complained  how I’d been there for over three hours, when suddenly someone entered through the automatic sliding door at street level sending a gust of cold air catching my make-shift ensemble exposing all that God gave me to the entire waiting room.  Some people laughed while other people merely gasped.  I was frozen in shock, and rushed to a janitor’s closet while my clothes were located.

I hurriedly dressed amidst the slop-bucket and mops I left with my ball cap pulled down over my face with chortles coming from the other patients – never to return to that hospital ever again.

I demanded to change hospitals during the next “insurance open enrollment period.”

Yes, Representative Harris, we have the best health care in the world.  Especially if you’re among the select few who’ve stumbled into the sugarplum privileges of congress.  But I have a personal message for Andrew Harris – wait the freakin’ month for your god-damned insurance to kick-in and shut the fuck-up until you get a brain-cell.