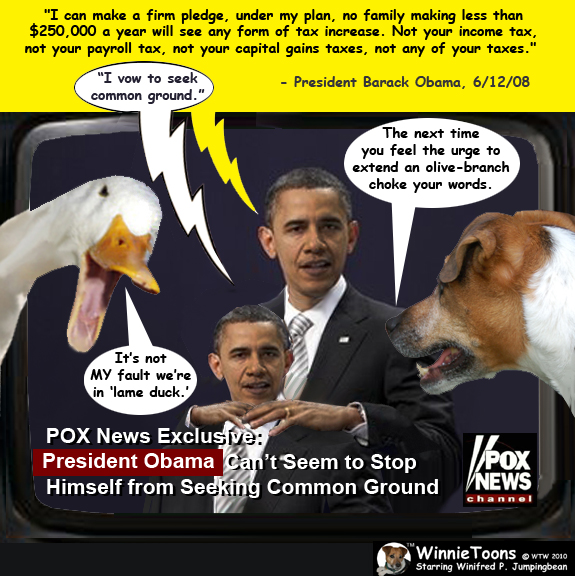 Such is American partisan thinking these days.

I believe Barack Obama is without remote challenge the bravest man in the world simply for stepping forward to take-on the disaster left in the wake of the Bush presidency, but I need to see more of that bravery for which I decidedly voted.  In the same breath he has the same weakness as most other democrats — he’s a gentleman playing-by-the-rules against an opponent party that has no morals, no sense of real-world future and no collective human heart.

Republicans will pile into church this coming Christmas and listen to sermons about peace, love and charity.  And by Boxing Day, they’ll be screwing the living daylights out of anyone less privileged than themselves — and casting aspersions toward the less privileged — as if those people have done something wrong for being poor.  More likely those republicans have done something wrong which has left them rich.

We’re living in an era of stark contrasts marked by the disparity between the classes – obscenely rich and devastingly poor with a rapidly diminishing middleclass inbetween.  I know a great many rich people, and among them I can’t think of one who would be so unpatriotic as to stonewall for tax-breaks for the rich while denying basic necessities to fellow American’s during a time of mass-hardship.  As more and more people drop off the middleclass-map into the abyss of poverty, I wonder if uber-rich republicans fully embrace the role of the middleclass as their own protective buffer between themselves and the festering rage which simmers within the terrifying world of hunger and poverty?

Ask Louis and Marie — or Nicolas and Alexandria…  Anything can be taken to the extreme, and wealth in extreme — not tempered by heart — historically leads to catastrophe.  It’s a form of insular indifference which has had dire consequences since the beginning of civilization.

If a family today can’t live on $250,000 a year, and hire a competent accountant to help see them through, then they deserve to be broke.  If you’re struggling and out of work because there is no work to be had through no fault of your own — that is an entirely different challenge.  A challange which would make anyone hunger for the bad old days of merely earning a quarter-million dollars a year.

Mitch McConnell and his cronies are willing to stall an extension of benefits for the less-privileged, and hold the poor hostage to retain the Bush tax breaks for the wealthy.  They will stonewall the ‘Start Nuclear Arms Treaty’ with Russia and vote against ANY worthwhile legislation (from the ‘Dream Act’ to ‘DADT’) during the lame-duck session of congress to insure that their children’s, children’s children will be secured a place among America’s wealthy royalty — just so long as they don’t have to witness the suffering first hand.  There are consequences to their greed, but the only consequence they seek is to bring about the failure of the Obama presidency to regain the White House for their own party in 2012.  It has nothing to do with the common good of the citizenry.

I want my president to fight these forces with all his might.  I want him to use the full power of his office like a master chess player.  Barack Obama is without question a brilliant man of the finest human qualities – and he has the patience of Job.  But PLEASE, sir, fight back ! I only hope that within his hesitation there’s a strategy which will become brilliantly apparent in hindsight…  But in real time, I don’t for the life of me know what that strategy might be.

The republican party is NEVER going to meet our president half-way.  I have watched Obama endure, with dignity, as republicans withdrew their hands in a receiving-line as he offered his hand in friendship and professionalism .  Not just metaphorically – but literally refuse his physical touch while captured on camera.  They’ve turned their backs to him and shown disrespect when invited to break-bread at the White House.  The republican party has lied, cheated, stolen and killed.  Wake-up, sir they are never going to come around to bipartisanship.  They irrationally hate you.  They’re committed to your failure.  You cannot reason with them.  Our only hope is the republicans will sink themselves, and that the American people will wake from their slumber to realize the grotesque evil and greed perpetrated by the republican party.


Ultimately the benefits for struggling Americans will be passed, and tax-breaks for the wealthy will have to be diminished, even as the republican party diminishes itself.


In the meantime, however, President Obama, feel free to raise your voice, weild your power and put your adversaries in their place.  If anyone can do that while still taking the high road, it’s you, Mr. President.  That is the hope which led us to cast our vote for you in the first place.

4 thoughts on “Please Use Your Power !”