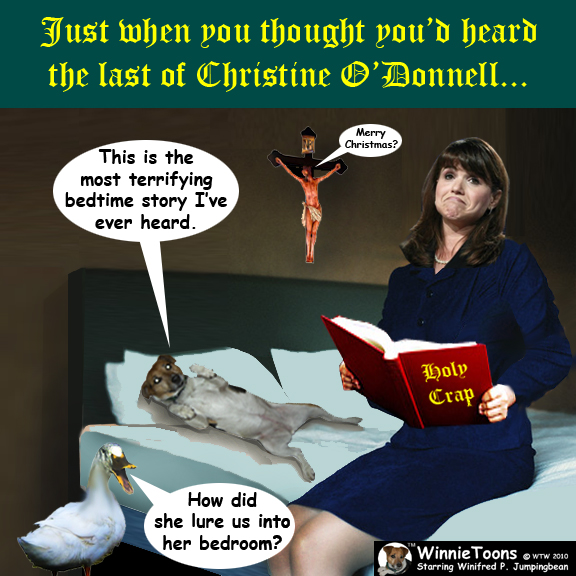 The Associated Press reported this morning that former Delaware senatorial nitwit and delusional bubble-brain, Christine O’Donnell seeks to stretch her fifteen minutes of fame to a full half-hour with the publication of her first book.  The book, according to O’Donnell will be about her experiences running from the truth while spilling her bitter tea.  But Winnie and Duck have received advance galleys via WikiLeaks, and have determined it’s actually a children’s book — a sort of cautionary tale, if you will…  So without further adieu, we are sharing the following manuscript:


The “Touching” Story of Jack and Dottie
by Pristine O’Donnell
© 2010, The George W. Bush Library

Little Jack Coffery and his girlfriend Dottie Diddle,
Only whipped-out their junk, when they both had to piddle.

One day whilst Jack stood peeing behind a grove of trees,
Dottie peeked ‘round to see what was hangin’ to his knees.

“Why do you stand to make-water whilst I squat on the ground?”
“I don’t know,” said little Jack, “but do ya’ wanna fool around?”

Just then the Lord appeared from nowhere, and smited poor Jack down,
With a vengeful bolt of lightening — left him dead upon the ground.

Distraught and grieving Dottie snapped a switch from the pee-tree,
And poked-it up her virgin’s hoo-hoo, like she’d been bitten by a flea.

KA-BOOM…!!! – the Lord thundered knocking Dottie off her feet.
“I shall not have thee playing with thyself — not even whilst in-heat”.

And so both poor children perished, having never gotten-off,
To spend an eternity ‘burning-in-hell’ at the Devil’s own trough.

The moral of our story, ‘witch’ should’ve never been written,
Is dittling and piddling behind tall trees,
Causith the Lord to see you are smitten.

In the name of the Blessed Virgin,
Amen.

3 thoughts on “The “Touching” Story of Jack and Dottie”