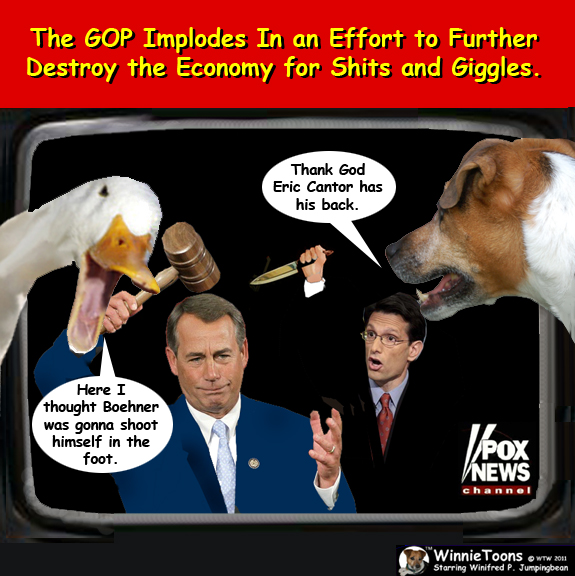 Yes indeedy, the Republican House of Representatives is working tirelessly to reelect Barack Obama — and why shouldn’t they given the embarrassment of baboons battling it out for the GOP presidential nod?  Add to that, the stalemate being dramatized by members of the House in order to block the extension of the Middle-class Tax Cut prior to the December 31st deadline — all indicators clearly illustrate the Grand Old Party is proud to be hopelessly out of step with the American people on all social and economic issues.

Here’s the GOP plan – starve-out 99% of struggling Americans by filibustering anything in their best interests, and hope the citizenry are stupid enough to blame it on Obama.  Knuckleheads like Mitt Romney say: “What America needs right now is leadership.”  We have leadership.  What we need is a functional Congress.  Romney knows full well, Obama can’t Constitutionally force Congress to pass anything.  He can be as persuasive as he likes, and even call them back to session — but if he’s being stonewalled, he’s being stonewalled.

Here we sit in the worst economic disaster since the Great Depression — a “recession” lest we forget designed and orchestrated almost entirely by the Republican Party.  It’s now completely acceptable in the GOP mind-set to merrily go bulldozing-over the interests of the average voter like stepping on a convention of pismire ants.  Republican’s have been feeling their political oats ever-since the ill-advised Supreme Court blunder known as ‘Citizen’s United’ deemed corporations to have the same rights as individual people.

Beyond all that, blocking benefits and tax-cuts for the middle class and working poor is not the way to bolster your party’s political capital leading-up to an election year.  Who doesn’t want to vote for a party that clings desperately to massive tax breaks for the uber-wealthy while picking the pockets of the average American voter?  The answer is clear: The Republican Party has finally come to the conclusion that they’re completely incompetent, know it, and are secretly hoping Obama will win.

Pay no attention to pinheads like Mitch McConnell and Michele Bachmann deliberately enunciating each bitten-off syllable, saying “We Will Not Rest Until Bar-rack O-bama Be-comes a ONE TERM Pres-i-dent.“ They’re merely using reverse psychology while speaking as if they’d all recently suffered a stroke. Deep down at heart Republicans are obviously huge Obama supporters.  There’s no other obvious explanation.  Here’s their plan, see to it your GOP candidates are indistinguishable from contestants on the Jerry Springer Show — illustrate that your party is in utter disarray — get all your Congresspeople to act like spoiled children — then take away what little money American’s have left — and you’ve got the perfect recipe for reelecting Barack Obama.

Republicans actually love Obama, and as they say, “you always hurt the one you love…” Not to say that Republican’s don’t love money and power even more — and Jesus Christ when it’s convenient.

There was a time when developing farmland into endless fields of press-board MacMansions was considered progress.  Now preserving virgin countryside is progress.  The definition of progress is constantly changing.  Such is the nature of the Progressive Movement.  Conservatives, who have no connection whatsoever to ‘conservation’ (except insofar as it comes to undermining the cause) see progress as best defined by standing still when movement is imperative.  Their plan is to keep outmoded systems in place, and even take a giant step backwards if at all possible: employing back-ass-ward thinking like repealing child labor laws, circumventing the Clean Air and Clean Water Acts and choking people to death environmentally and financially, all for the greater good of corporations…  And VOILA – you’ve got the modern American GOP platform.

John Boehner, who was clearly in-over-his-head as a mere member of the House of Representatives from the State of Ohio, is embarrassingly inept as Speaker of the House.  But not to worry, Eric Cantor is waiting in the wings to trip Boehner off the stage into the orchestra-pit and step into the man’s shoes the minute he figures out how to best undermine his old buddy.  Cantor has arguably been one of the single most vocal forces of obstructionism in Congress over the past decade. This is the man who wants to peel-back safety standards on nuclear power plants even after the epicenter of last summer’s 6.0 earthquake struck frighteningly close to a nuclear reactor in his own state of Virginia.  This, mind you, hot on the heels of the world witnessing the catastrophe at Japan’s Fukushima Nuclear Power plant following a huge natural disaster. Cantor is a real giant among mental midgets.

All this adds up to one thing: The Republican brand knows they’re crazy, collectively incompetent and in no way prepared to take the reigns of leadership.  That brings me to only one conclusion: The Republican Party knows it’s best for the nation to reelect Barack Obama, and are behind him 100% – well that, and Eric Cantor wants John Boehner’s job — badly.