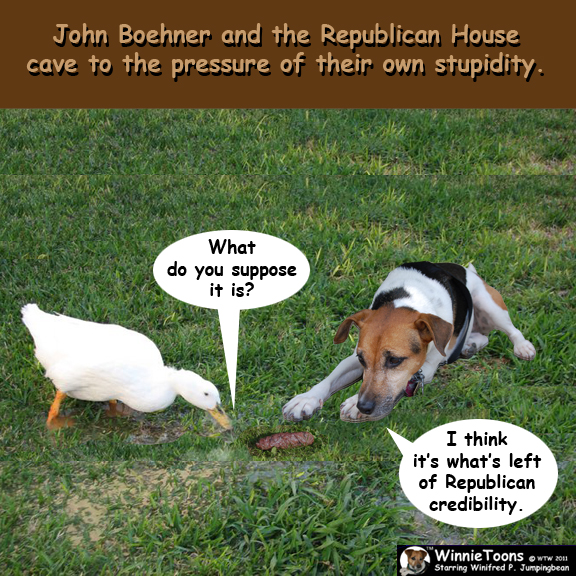 The Republican House finally caved today under the weight of their own stupidity, and it wasn’t pretty.  A contrite and humble John Boehner came out late this afternoon, desperate to get out of Dodge before Christmas.  Even he couldn’t stomach his own party’s obstructions blocking the extension of the ‘Payroll Tax Cuts for Middle Income Americans.’  In the long run, the House had to cave on the tax cuts – even if it IS only for 2 months.  The GOP is on record trying to make the tax cuts for the wealthiest citizens permanent, and the American people know it.  So we settle for a 2 month breather, and then go through the same bullshit all over again – hopefully this time without the Republicans trying to sneak-past environmental disasters like the Keystone Pipeline as part and parcel of the deal.

We’ll watch this same drama play-out all over again exactly in time for Groundhog Day just as the Republican presidential nominee is announced.

Both ironic and appropriate, isn’t it?

How many times in the past 3 years have we watched the Republican Party stand in the way of common sense and the will of the people merely to be obstructionists?  Way too many times – remember the Balanced Budget Amendment?  It seems the GOP credo is to create the problem and then block the path to fixing it.  Now Republicans are going to have to find the fancy footwork necessary to do the obstructionist dance while attempting to win-back the oval office.  Sweet.

If it isn’t abundantly clear to most voters that the GOP is more focused on destroying the Obama presidency than attending to the business of moving the country forward — then those voters are either not paying attention or way too willing to fall into lock-step simply to unseat a black president.  I’m tired of listening to these people.  I’m sick of hearing Republican candidates and talking-heads blathering-on about how we need “leadership.”  We’ve got leadership, and we’ve got a shitload of problems to solve too – none of which are being addressed by a do-nothing Republican House of Representatives.

Here’s the basic truth: The Republican Party under Bush/Cheney destroyed the American way of life for decades to come and NO ONE — NO ONE can fix it in one or two terms.  All any president can do faced with our current preexisting economic climate is try to set us back on the right course and hope against hope that future administrations follow suit.  We’ve heard no solutions for the American recovery from the Republicans — and when Obama tries anything from reaching-out for bipartisanship to proposing workable solutions — the Republican party bites his hand — and in doing so, bites the hands of every single American citizen.  I’m tired of these people, they’re full of shit.  They’ve had their chance, and they’ve blown-it.  Now it’s time to get with the program and realize the GOP represents a carry-over from a toxic past, representing no hope, no morals and no future.

Be done with them, we’ve go to get on with the task of cleaning-up the steaming pile they’ve left in their wake.