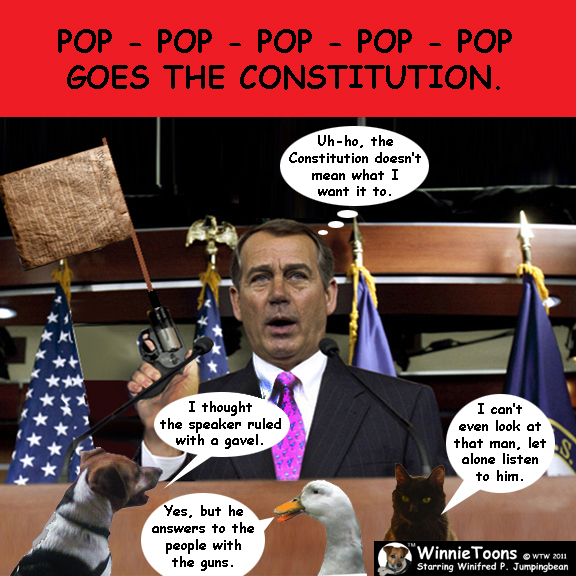 The Republican majority in the house is off to a dubiously auspicious start.  First with a well-intentioned “reading” of the Constitution on the floor of the House of Representatives – conveniently leaving out pages and amendments which were either embarrassing or inconvenient.  Several pages got stuck together, no doubt because some Tea Party neo-con was salivating over the parts dealing with slavery in a quiet bathroom stall.  Two veteran House members, Rep. Pete Sessions (R-Tx.) and Rep. Mike Fitzpatrick (R-Pa.) skipped the swearing-in ceremony in order to attend a celebratory fund-raiser.  They raised their right hands in front of witnesses at the fundraiser while watching the ceremony as it was being televised on CSPAN.  They thought that was good enough.  It isn’t.  Those same to idiots later cast a vote in the house without being properly sworn-in, making the VERY FIRST ACT of the new House majority to be outside of Constitutional law.  We are at the mercy of morons.

As Representative Frank Pallone (D-NJ) was reading the passage about natural-born citizens of the United States qualifying to be president, a “birther” (a group not known for super intelligence) shouted out from the peanut gallery “EXCEPT FOR OBAMA !” – and was removed by the authorities and jailed.  Later when the tanned, drunken, lazy new Speaker of the House, John Boehner was questioned about this outbreak during an interview by Brian Williams on NBC Nightly News, Boehner gave a soft-ball answer about taking the records of the State of Hawaii on their word, but failed to condemn the words of the ‘birther.’  By benign neglect, the Speaker has already failed in a significant and symbolic way to control the crazies who form the crooked spine of the far republican right-wing.

Also during that same reading of the Constitution on the House floor, Democratic Representative, Gabrielle Giffords read aloud the passage dealing with the “freedom to peacefully assemble.”  As we all know, she was later shot in the head while meeting with her own constituents at a “Congressman on the Corner” event where she reaches out to the people of Arizona to listen-to and address their concerns.  As I am writing this, she lays in the hospital with critical life-threatening brain injury.  28 people were shot by a 22 year old Tea Party neo-con who found his inspiration from reading Adolph Hitler’s Mein Kampf.  His Tea Party candidate didn’t win, so he took his “2nd Amendment” remedies into his own hands and diminished forever the sense of safety and connection members of congress will enjoy while engaging in efforts to meet with and address the needs of the people of their districts.  Federal Judge John Roll died along with 5 other people – a total of 6 dead and 14 seriously wounded.  Among the dead is a 9 year old girl named Christina-Taylor Green.  Christina was born on September 11th 2001, and was featured in a book of the children born on that fateful day.  She had just been elected to her student council and was at the Arizona Safeway grocery store’s corner to listen and learn from her own state representative.  The monster who did this will not have his name appear on my blog, as people of his character derangement do what they do to secure their own pathetic names in history – like all brutal assassins from the beginning of recorded history.  He is someone with nothing to offer but violence.

But I’d like to call out a few names on the honor-roll who need to share in the blame in this horrible incident.  Sharron Angle, (failed Nevada senatorial candidate and loose cannon), who along with Sarah Palin coined the phrase “2nd Amendment remedies.”  Glenn Beck, Sean Hannity, Bill O’Reilly, Rush Limbaugh, Michelle Bachman and Jim DeMint, to name a few, have all used incendiary rhetoric to insight unbalanced, low-information individuals to be so emboldened as to take this sort of disgusting and reprehensible action.  What we witnessed this past Saturday in Arizona is the polar-opposite of what America stands for.  Arizona is a state that needs to take some serious time to reflect on what they are in danger of becoming or may have already become.  So does the rest of America.

My heart goes out to all who are personally effected by this event.  May the dead be respected, the wounded healed, and the loved ones left to ponder why this happened, some measure of peace.

From this point-on, I’m handing over the rest of this post to Mark Powell to rant to his heart’s content, as a former Arizona resident and recent Arizona ex-patriot who has moved to higher and saner ground.  Mark and I do not agree on everything, but we are able to disagree without loosing respect for one another.

The following are Mark Powell’s words:

I am not a pacifist. I do not believe in the disarming of all American citizens. In fact I feel that mentally competent, rational adults have a responsibility to protect their families, by armed force if necessary. However the events in Tucson this morning beg the question WHY was this asshole allowed near a gun? He had already been shown to be mentally unfit (even the army didn’t want him) and had many run-ins with the law. Poster child if ever there was one for “not allowed to carry” EVER!!!
Federal officials receive threats every day. Occasionally they get more than threats. So Congresswoman Giffords (whom I support, even before this) and the judge, even their aides knew this was possible. But the NINE YEAR OLD GIRL brought to the event by a neighbor because she had an interest in government? Not a chance of a clue this was in store for her. According to MSNBC she was a newly elected member of the school council with a hunger to learn about how government works (or at least, is supposed to work.)  I can excuse shooting a government official, to an extent. If they are significantly abusive, or harmful, or in a Revolution, (which I fear is coming) However I can NEVER condone harm to children. That is not warfare (sorry Al-Queda, you are not Freedom Fighters, you are just murderers) it is cowardice. Don’t get me wrong, I think his shooting Giffords and the judge is wrong on many levels but they went into the job knowing it could happen. Personally I think that Giffords was working very hard for the common good. The judge I never saw what his career was like, so, let’s give him the benefit of the doubt. So this idiot has shot innocents and those who were working for our benefit.
Giffords was one of the few who could step outside the party lines to do the right thing. I know the criticisms leveled about Senate Bill 1070. I HAVE read it. It states that the local police are responsible to enforce federal immigration law in situations where there is a reasonable suspicion that someone they are dealing with for other reasons may be here illegally. It specifically ruled out race as a factor. It was not allowed to be considered. Yet we hear from those who did not read it that Arizona was writing their own immigration laws, and how racist we were (after all, I did live there then) But the law was not about immigration, or even Mexico, it was about empowering the local police to also enforce federal mandate. Giffords was threatened for supporting it despite being a Democrat. She is respected even by those who oppose her. She was working tirelessly, selflessly (which is odd in itself) for the good of ALL Americans, in addition to Arizonans. I hope she recovers to continue her work.

My heart and thoughts go out to the victims and their families. And the (language alert, turn away if squeamish) the fucking asshole who killed a nine-year-old girl, I hope they drag that son-of-a-bitch out to the desert and tie him to a saguaro cactus with green rawhide and let nature take its course. That walking piece of crap needs to die a horrible, horrible death. And I volunteer to administer it!

Mark hopefully now feels better.  I think the shooter should spend the rest of his young life in solitary confinement.  That’s much crueler than death, while not diminishing our own hands with blood.

11 thoughts on “POP Goes the Constitution”