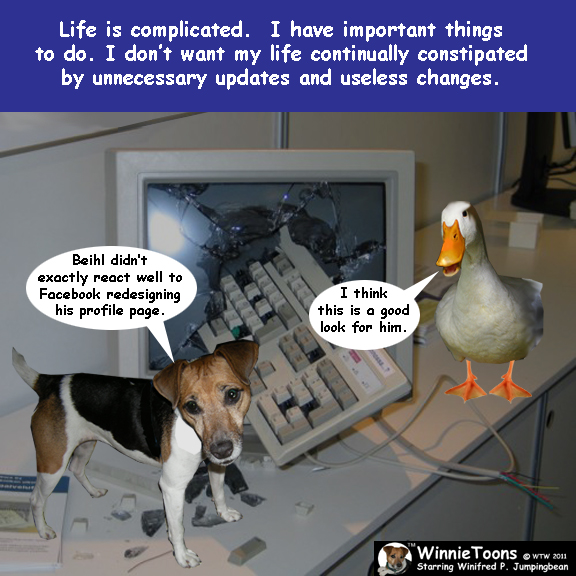 I’m a baby-boomer, which is an odd name for a group of people all well-over a half-century old.  I don’t make any claims to being a genius, and I was admittedly unfocused at the age of 26 – in every conceivable way.  Point of fact at the age of 26 I was preparing for the first of 2 sets of critical eye surgeries – 2 per eye – the aftermath of which left me an emotional wreck for years.  I’m trained as an artist and continue to be one, but vision impairment was never part of my future plans nor on my wish list.  So perhaps I was crazier at 26 than Mark Zuckerberg, and I was decidedly less focused.

There are serious questions as to the integrity of the method through which the boy obtained the Facebook concept – his “brain-child” – I wasn’t there so I can’t comment.  I didn’t even see the movie.  But no one makes a sixty-five-million dollar settlement if innocence is wholly on their side.  However he obtained the Facebook concept, he’s definitely made a run of it.  Nor can I comment on what he does with his fortune, but I can comment on the maturity level of a 26 year old – and success – especially astounding success, is not something 26 year old’s historically handle well.  Look at child stars and young starlets.  Take Lindsay Lohan for instance (please, someone take her – she’s not a genius by anyone‘s standards) but she was clearly unprepared for so many ‘sobering’ calamities in such a short span of time.  Lohan is nothing but a tabloid train-wreck – where Zuckerberg, on the other hand has unparalleled power – which I for one have no reason to trust.  He has a command over the lives and personal information of what is now effectively the world’s 3rd largest non-recognized country – so lets call it a “non-exclusive chat-club” instead.  With a net worth of 6.9 BILLION dollars, Zuckerberg is the 35th wealthiest person in America.

At better than twice his age, I’d like to share what he and I have in common:


There are so many, many things 6.9 BILLION dollars could do to make this world a better place – and I’d take great joy in doing them.  OK, the boy gave a piddley five-hundred million to bailout Chris Christie’s idiotic mistake in cutting the New Jersey Public School System and then failing to apply for government grants in time.  Christie is an imbecile, and even looks like one.  But the list of dream-projects a mature, fair-minded person could do with all that wealth is as endless as counting his billions, one penny at a time.  Think of the medical research, educational grants, mental health programs, animal rescue, aid for the handicapped, seed money for new businesses to create jobs in a painful economy.  Imagine the joy of preserving our historical and natural treasures – the list is endless as the imagination, but his money sits in the bank like he’s a youthful J, Montgomery Burns.  He doesn’t honestly know what to do with it.  Lets hope the child snaps to.  It took Bill Gates a far longer time than it should have to reach a charitable conclusion, thanks only to Warren Buffett.

Last week Goldman Sacks obtained an exclusive option, (already sold-out), for stock shares in Facebook – WITH taxpayer money to secure the risk – to dole out in nibbles and bits to preferred, wealthy customers.  If this venture tanks, the already overburdened middleclass will add that financial failure to our growing,  incomprehensible national debt.  What are we doing allowing our government and Wall Street to join forces with taxpayer-backed dollars to allow a fledgling overnight corporate giant to go “semi-public” at our expense in the first place?  Let them do it on his own without risking OUR money.  ESPECIALLY to an exclusive club of already wealthy investors and corporate entities.  What if Facebook turns out to be another dot-com bubble?  Big Brother Google, who is to a degree in partnership with Facebook, is already designing their own social-networking product to compete with Zuckerberg.  If the market is glutted, and bubble pops, then our economy will further sink to oblivion.

The cyber world is like quicksilver – here forever and gone in an instant, all at the same time.  And damned it, it’s all beyond my control.  NOW so is my profile.  Zuckerberg enforced design modifications.  I hate having my time wasted with confusing updates and forced profile changes just as I get accustomed to doing things a certain way.  I further dislike the fact that my profile photos now includes a plate of spinach in garlic sauce, and I have no idea how to get rid of it.  I photographed a meal once.  It was delicious, but I don’t care to be defined by it.  Suddenly I’m putting myself out there to the world as if I’m a vegetable side dish – because Zuckerfuck DEMANDED that I accept his new profile formula – and almighty HE would electronically pick and choose what photos would best represent me.  I’d have preferred him to have kept it simple.  I have other things to do in REAL life. But then again I don’t live in the cyber world, I merely visit it as a CyberSpaceTraveler.  And Zuckerberg will NEVER get my real birth date.  Ever.

So — OK kid — you’re rich beyond your wildest dreams.  Now do something worthwhile with it, if you understand the true meaning of the word ‘worth.’