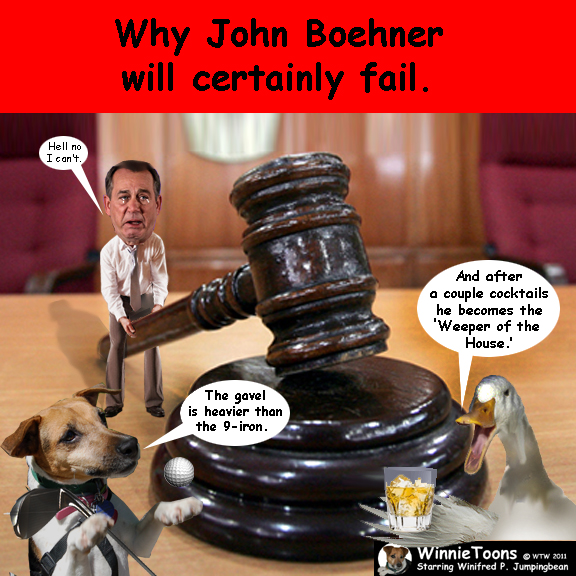 John Boehner – Is He Prepared to Lead?  If so, WHAT?

Selfishness and mean-spiritedness seem to be excusable traits in this country as long you claim to be Christian, newly inaugurated Alabama governor, Robert Bentley, who clearly stated in his inaugural address that non-Christians are not his “brothers & sisters.”  Electing assholes can be toxic.  With all the grizzly right-wing fringe Tea Party lunatics calling the shots, and their candidates scoring a certain, “startling” number of wins, I’m left wondering HOW, and IF people think beyond their own self-absorbed wants – not needs.  Needs are something left unaddressed.  “MAKE MINE MINK” would appear to be the mantra of the new conservatives.  You hear chants about “Get the government out of my Social Security” (how do they think if happens?) or “Stop Medicare for other people.”  The extreme right thinks they’re shouldering all the financial burden, but when you read between the lines, what they’re really saying is ‘socialized programs are fine as long as they only go to people who look like themselves.”

This narrow-mindedness is typified by John Boehner who can weep over a dip in the stock market while trumpeting his success in life — then without missing a beat, work to prevent other people from attaining anything close to his own dream (as much as he may be capable of “working”) .  It’s as if the right-wing brain-set is hard-wired to be cold, lacking compassion, and more than willing to blame the poor for being poor as if poverty was a crime.  More than likely wealthy neo-cons have more to be ashamed of in how they’ve acquired their wealth, than any persons of inherited poverty.  A woman commented to me just the other day about how she’s “worried-sick for the future of her children who only have 6-figure trust-funds.”  A jaw-dropping disconnect from the hard reality most of the people of this world face.

And now the House of Representatives is being led by the man widely recognized as the laziest man in Washington.  John Boeher is more of a spray-tanned drunken golf-pro than a real ‘man of the people.’  OK, he’s a man of the rich, straight WHITE people – but that’s hardly anything that brings him ny closer to MY heart.  I think the man is a fool who stumbled into power much the same way dog-shit is tracked on a shoe and lands on a fine Aubusson carpet.  His first move is to do everything in his power to either repeal or block funding to Obama’s signature legislation, ‘Health Care Reform.’  He doesn’t care if millions of people will benefit from this progressive change.  He cares only about the obscene profits gathered by the health insurance companies.  Follow the money trail…

Boehner will do nothing in Congress but stonewall, (God, if he’d only do it in drag…)  Already he’s snubbing state dinners, and failing to fly on Air force One.  This man owes his career to obstinacy for the mere sake of being contrary.  He’s owned lock, stock and barrel ( is that a GUN reference?) by corporate America, with only a nod of double-talk to the people he represents.  Satan only knows what he’s up to behind closed doors in his office, let alone in his apartment in the ‘Brothel on C-Street’.

At this point, I want to mention I offered the opportunity to a number of far right-wing conservatives I’ve talked to on Facebook to counter or comment with their views (unedited) regarding John Boehner.  None of them were willing to go on record.  I still welcome those comments, if anyone is willing to do so.

However, Mark Powell, with whom I rarely disagree did choose to write a few words.  So the right-wing viewpoint remains silent, at least on this blog.  At least I offered.

Mark picks-up from here with his guest comments:

Ah John Boehner, where does one begin? We’ve just sworn in as Speaker of the House the first 6 foot tall Oompa Loompa. However in keeping with the public persona this big orange anomaly is, I have to ask, rather than Speaker of the House, should he not instead be appointed Town Crier? The man has made apolitical career out of being an intestinal blockage and now is third in line to the Presidency. This should be ample incentive to all to ensure that both Barack Obama and Joseph Biden stay in PERFECT health. John Boehner, during Bush’s administration advised the President that our benchmark’s in Iraq where “good” and “very important” yet those same benchmarks, in 2007 when the Democrats were supporting them, became designed to “ensure failure” But then, we expect our politicians to flip-flop on issues and say whatever lie will get them elected.SO let’s look at his savvy when science is involved. This man has stated that humans are not impacting global warming, that it is the fault of cows defecating. Well, I think there is enough bullshit to credit global warming to, but enough about Congress. This staunch Ratpublican’t ran on a ticket of smaller Government, less spending and fiscal frugality. Then voted in favor of a 9.8 TRILLION dollar budget for President Bush, and has ever since been blaming the high cost of Government on the Dumbocraps.While John Boner,, um sorry, Boehner, is no shining example of, well, anything, other than maybe hypocrisy, he is ample evidence that the national political scene, like most Americans, is totally bankrupt. This one man alone is a stellar “poster child” in the “We need REAL change” campaign. So in 2012 when the circus once again rolls through, let’s send them all a message, that we are sick of the clown car routine in the Beltway and we want our nation back.

3 thoughts on “John Boehner – Is He Prepared to Lead? If so, WHAT?”