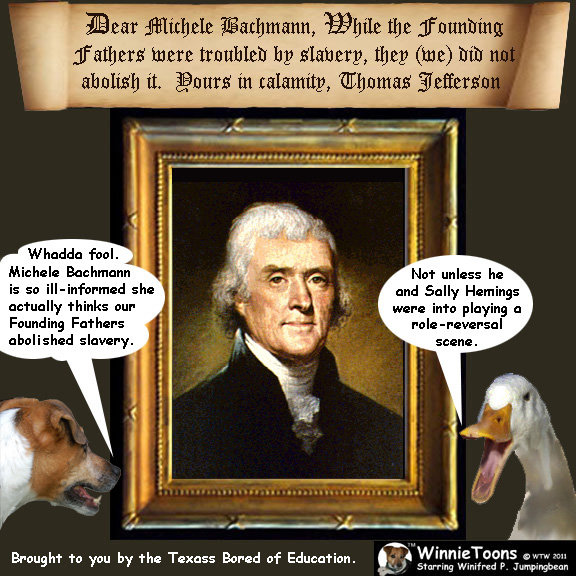 Michele Bachmann is a certifiable imbecile.  She thinks no further than the end of her nose, and shoots off her mouth like the loose cannon she is.  Heaven help us if she ever runs for president.  It would however be an entertaining cat-fight between she and Sarah Palin – TV ratings everyone.

Back when Bush was the president, you could count on the State of the Union address to be a careful blend of scary-stupid and downright funny-frightening.  President Obama speaks in full coherent sentences and has an actual PLAN – whether all Americans agree with him or not.  I happen to agree with him.  Without Bush in the picture, all the high-pitched comedy is coming from Michele Bachmann and the far-right wing Tea Party.

In Bachmanesque fashion, Michele thinks “the ‘founding fathers’ fought valiantly to end slavery”.  She said so kinda not looking into the camera but rather somewhere else in outer-space.  I’m not sure she knew where the camera was.  Or perhaps she doesn’t realize when she speaks aloud, people can hear her.  Maybe she thinks if you look away from the camera no one can see her either.  Does that woman run her ‘factoids past anyone first?  Isn’t there at least some misguided neo-con intern willing to do some research for her?  I mean at a bare minimum look it up on Wikipedia for Christ’s sake.  No, not Michele.  She’s blithely unaware the founding fathers wrote into the constitution that a slave was property and merely represented 3/5th’s of a person.  Pretty unsettling stuff if you have a moral conscience.


I personally feel that Thomas Jefferson did have a moral conscience.  No man capable of such powerful and enlightened words as drafted by his hand could possibly be so morally bankrupt in that part of his heart.  Jefferson’s words are truest to himself in the Declaration of Independence – “We hold these truths to be self-evident that all men are created equal; that they are endowed by their Creator with certain inalienable rights; that among these are life, liberty, and the pursuit of happiness.”

On the other hand, the Constitution is more decree by committee, if you will…  But I can easily see Jefferson as a product of the social attitudes of his time.  In the 18th century a high-born white man didn’t love a black woman out before the judgmental eyes of the whole world.  It was impossible.  People couldn’t openly declare their love the way mixed-race couple can today (in more enlightened blue-states, that is…)  In the 18th century it was difficult enough to court within your own race while crossing social boundaries without it becoming a scandal.  America has always been sexually repressive and zealously religious.  Bad combination.  I’ve often speculated as to whether Sally Hemings wasn’t in reality the great love of Thomas Jefferson’s life – and I’m not the first to wonder that.  The truth of their secret lay in the souls of those two lovers, for none of us ever to know for sure.


Progress is never fast enough for those who are living through it.  I see that as a gay man.  But as a little boy I remember traveling with my parents to visit the historic reconstruction of Williamsburg and stopping to eat in a Virginia restaurant where there were separate dining areas and restrooms for black and white patrons.  And that, mind you, was 180 years AFTER we declared our independence from King George III.  Even as a kid I was struck by how odd and uncomfortable that segregation felt.  My schoolmates were of all races, and my parents didn’t raise me with a racially prejudiced worldview.  Thankfully they were progressive in that respect, even back in the 1950’s when I was at my most impressionable.


But does Michele Bachmann have a clue about the Civil War or the racial tensions of the 1960’s fully 100 years later?  Not only is she ill-informed, dizzy-eyed and talking in circles, this madwoman is doing liberals a great favor by drawing attention away from more coherent but equally disagreeable republicans.  For her to claim our founding fathers did much more than worry about the future so far as slavery was concerned — is like Mitch McConnell coming out against earmarks after a career history of abusing them.  Speaking of disagreeable republicans…

Doe-eyed Paul Ryan’s official republican rebuttal was all but eclipsed by Bachmann’s nonsense.  She’s fracturing her own party and I couldn’t be more pleased.

Paul Ryan is easier to look-at, but not so easy to listen to.  Ryan has dreamy eyes and nightmare ideas – like privatizing Social Security.  Wait until that sinks-in with the aging baby-boomers.  Both Bachmann and Ryan are opposed to all sorts of “entitlement programs” – Social Security, unemployment, Medicare and Medicaid.  As if “entitlement” were a dirty word.  They’re called “entitlements” because we PAID into them our whole lives making us therefore ENTITLED to them.


As “entitled” as a brilliant young black president, who happens to be a Constitutional scholar trying against all odds to unify us as a people so as to lead our country forward.  I would speculate Thomas Jefferson would identify more with the words of Barack Obama than with the greedy, shallow-thinkers of today’s extreme right-wing.


No wonder the Texass ‘Bored’ of Education wants to write him out of our history books.  Both Jefferson AND Obama that is.

7 thoughts on “History According to Michele Bachmann”