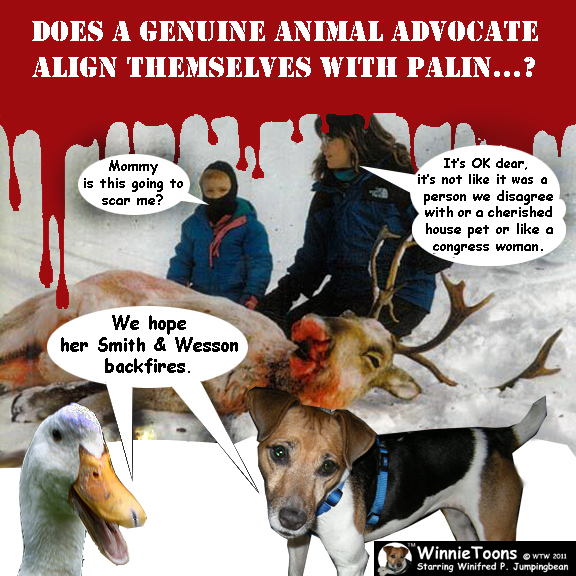 I was stunned today to see several people with whom I work in animal causes, celebrating Sarah Palin’s birthday on their Facebook pages.  How does one get that detached?  I’ve seen Palin beat a halibut to death on TV purely for ratings.  I’ve seen her blow the bloody head off a caribou, again for ratings.  She’s flying in choppers picking-off wolves with her high-powered rifle and it’s famous “cross-hairs.” I’ve seen her sofa draped with dead animal pelts, purely out of a misguided sense of interior design.  I know more about that idiotic woman and her sordid life than I’d ever have cared to.  You can’t get away from her.  Palin is no animal advocate, but on the peculiar side, Rush Limbaugh IS.  Well, he’s also a drug addict and an old lecher, so he’s hardly a sterling example of anything.

But Palin’s animal killings have nothing to do with “sport” – nor does that of most primitive thinkers.  It’s the pleasure of the kill, pure and simple.

How does this brain-disconnect with regard to compassion take place?

Perhaps it’s easier to show empathy for animals, while detaching from the plights of people(?)  This seems like a kind of transference to me – especially on the part of wealthy white republicans.  The underprivileged are somehow to be held accountable for their own lack of good fortune, whereas animals and small children are not.  Well some small children.  I’ve actually heard people express revulsion at how only third world children are featured in ads for UNICEF or the ‘Save the Children Fund‘.  Worse yet, I’ve heard people say “they’re so cute while they’re still little” as if to say those children cease to be human once they’re no longer “adorable” in the eyes of the thoughtless.  It should surprise me how hyper-Christian so many of these people claim to be, but it doesn’t.

I suppose there’s no explaining or understanding the widespread lack of human empathy.  Some people simply don’t think very deeply, and I guess I’ll have to leave it at that.