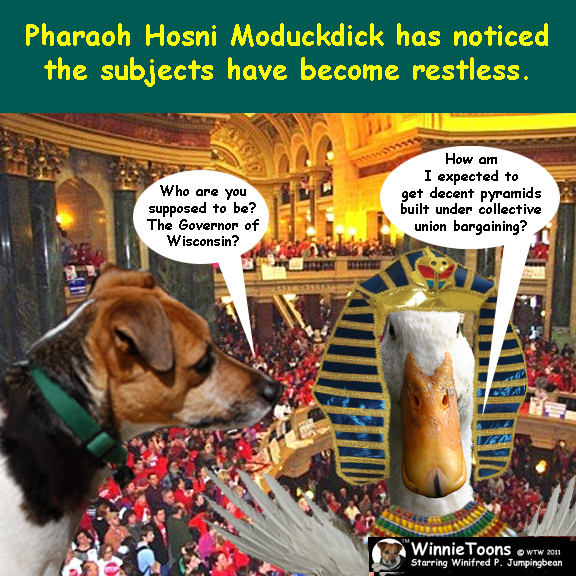 We have to trim our budget.  Federal, state and local.  Everyone agrees, but not as to HOW.  When 2% of the country controls 87% of the nation’s wealth, something is out of whack.  In the same breath, Americans like to buy inexpensive goods, so corporations send jobs abroad where the work-force is not unknown to slave-labor, prison-labor and child-labor – all things we purport to abhor in the United States of America.  We don’t stop to think about the 3rd world child chained to a cobbler’s bench making Nike soccer balls or Kmart clothes produced in Chinese prisons.

Wisconsin Governor, Scott Walker, is a very ‘green’ politician – but not in the good way – he’s clueless.  The man’s a green-Tea Party politician with family in high and convenient places who wants to remove collective union bargaining from the table, effectively breaking-up unions and disrupting vital services he’s too dimwitted to comprehend.  Actions like his would further divide the huge gap between the over-privileged and the hard-working – giving labor far less voice in their own rights, lives and futures.  And while no one thinks union bosses are always among the most admirable of people – Wall Street bankers and corporations, along with the politicians they carry around in their pockets have far more to answer-for as to the country’s fiscal crisis on all levels of government than anything they’re trying to pin on the card-carrying,  blue-collar labor unions.

Where else have we fiscally gone wrong?  Look no further than the senseless wars brought about by the Bush Administration.  Afghanistan should have been an international police action and not a war – every sensible thinking person knew that.  And the Iraq War is completely indefensible – nothing more than a corporate/government gas station robbery costing countless lives, not to mention financial resource.  So if you’re wondering where all our nation’s wealth went – it went to illegal and mismanaged wars, congressional and corporate corruption and the extension of the Bush tax breaks for the wealthiest Americans – many of whom further benefit from corporate welfare.  WHY are we subsidizing the oil companies, when all 6 of the top earning corporations in the WORLD are oil companies?

Personal family wealth in most cases, is accumulated generationally, passed along – and there it stays handed down with protective inheritance laws that are far too generous to the spoiled-rotten trust-fund babies who only know about their own comfort.  Talk about entitlements…!!!

We need to rethink the tax-codes for inherited wealth AND on-going accumulation of wealth back to where it had been during the Clinton years.  End the offshore corporate tax loops and subsidies for companies who ship jobs overseas, and STOP BEING war-mongers.  Then there just might be enough to go around so all our nation’s people have a fair chance to attain the American dream that gets John Boehner all weepy-eyed about his own good fortune.  He needs to start crying-a-river over the plight of the people who strive to attain the same American dream for themselves.  And when Boehner’s “young-gun” crony, Rep. Paul Ryan of Wisconsin says the people of Wisconsin are “going all Cairo on us” – THAT to me implies that Republican Governor Scott Walker is being unwittingly compared to former Egyptian dictator, Hosni Mubarak.

Well voters, be careful what you vote for, you just might get it.  Hopefully voters will someday at least understand the value of their vote and stop pulling levers for candidates who act counter to their own best interests. People also need to start paying attention to midterm elections.  Not that I go in for sports metaphors, but the younger voters, black voters and liberal voters did not have their ‘star’ player’s back when he needed them most – right before halftime.

8 thoughts on “Be Careful What You Vote for, You Just Might Get It.”