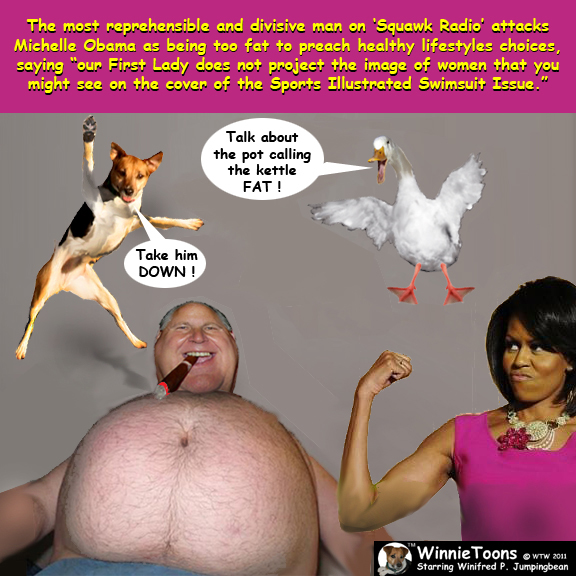 There are some people who are so inappropriate that they’ve made a career of it.  Usually they’re comedians who are intentionally funny at someone else‘s expense.  I‘m about to do it now, but at Rush Limbaugh‘s EXPANSE.  Rush is vying for the title of most reprehensible, moronic slob in the universe, by going on the attack over Michelle Obama’s healthy eating and exercise initiative for children and all Americans – HE accused HER of being a poor role model – by criticizing the First Lady’s weight, figure and fashions.

Michelle Obama is a beautiful woman with a healthy, fit build.  She’s a 47 year old mother with 2 children – AND she works out on a daily basis.  Mrs. Obama is not a slave to the anorexic, unhealthy trend of bony-assed heroin-chic runway models who grace the covers of women’s magazines – resulting in normal women feeling bad about themselves because they don’t wear a size ZERO.  Limbaugh, among other disgusting and tasteless comments, said “Our First Lady does not project the image of women that you might see on the cover of the Sports Illustrated Swimsuit Issue.”  Like he belongs on the cover of Men’s Fitness…?!!!

To attack an intelligent, warm and successful person trying to bring about positive change in this world is Limbaugh’s specialty.  Limbaugh’s a fat, grotesque, cigar-smoking billionaire bigot, who can purchase serial-monogamy loveless supermodel-wives.  He wouldn’t know anything about a healthy, loving relationship, let alone LIFESTYLE.  He should go pop another illegally gotten, constipating Oxycodone, and wash it back with 12 year old single-malt scotch.  His attack against Michelle Obama has more to say about his own fragile self-esteem than anything concerning her courage and dedication to draw attention to what has become America’s national obesity epidemic.

Had Laura Bush taken the same stance, Limbaugh might not have changed his drug-laden, smoke-filled fatty lifestyle, but he wouldn’t have called her out on it either.  The man is merely looking for ways to create faux controversies to put himself back into the highly competitive (and growing) spotlight of ‘lunatic crazies’ vying for extreme right-wing attention.  At lease Laura Bush had the courage to speak-out against drunk-driving, as the former First Lady holds the singular distinction of being the only wife of a president to kill anyone.  Granted, she was a drunken teenager at the time, and mowed-down a boy (shooting him 80 feet in the air) when she saw him on Lover’s Lane with a girl who wasn’t HER.  But Laura is white and her Texas records have been expunged.  If a black teenage girl had done the same thing, that teen would have rotted in a Texas prison for the rest of her life – or Laura’s own husband, Georgie might have signed the death warrant when he was Texas’ governor.  Limbaugh would have been the first one to have applauded from the peanut gallery.

Limbaugh is a blatant racist who’s sole objective is to whip-up gullible fools into a frenzy of bigotry and hate.  The man doesn’t even believe the things he, himself says – he says those things for ratings and dollars – and for the chance to spread his personal brand of venom.  So here’s some back at him:  Picture one night when Jumbo-Limbo comes home and presses his repulsive gut and smoke-filled breath against his exceedingly YOUNGER current Bimbo (who’s skin has GOT to be crawling at his touch) while he suffers a stroke or heart attack after glutting himself on the same barbecued spare ribs he criticizes Michelle Obama for eating.  It’s hard to picture the physical geometry involved in Rush having intercourse, but if Limbo’s trophy wife even lets him near her, the thought of that cardio-vascular workout just might one day lead him to meet his maker – or pacemaker.  Imagine the ‘Almighty Lord of Crisco and Bullshit’ being lowered into the ground in a Steinway concert-grand packing crate – upholstered with a fine tissue of his own FAT lies. 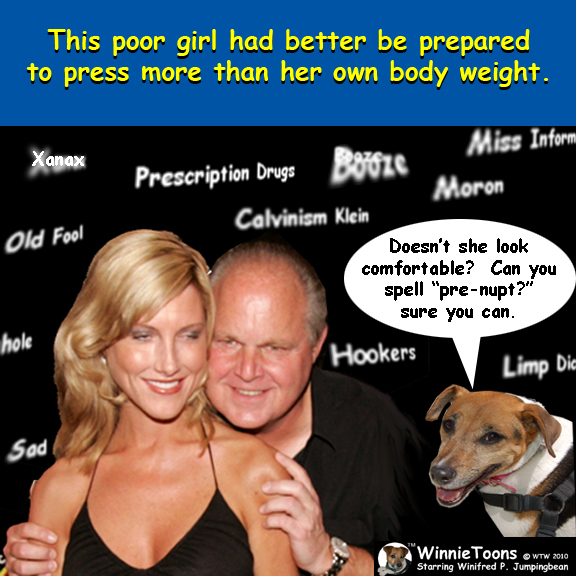 5 thoughts on “LIMBO and his “Whale” of Lies”