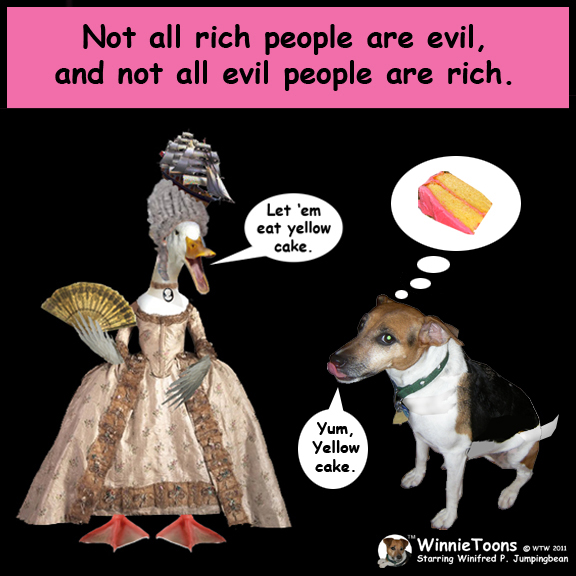 When Marie Antoinette said “Let them eat cake” she wasn’t referring to a sumptuous chocolate-velvet cake or even the toxic yellow-cake used in nuclear reactors and bombs – she was referring to the cooked-on crusts that remain in the pan when the good-stuff is removed and served.  In other words, what is left caked onto the pan’s edges.  Just look at where that sentiment got her…

Not all rich people are evil – and not all evil people are rich.  Those are two completely different conditions.  Some wealthy people put their riches to good use serving the general betterment of the world – funding medical research – or giving dollars to arts programs that enlighten us all with precious viewpoints to enrich the mind.  Warren Buffett is a sterling example of the good philanthropist – one who has even gone so far as to ‘guilt’ other wealthy people into giving back to society.  He knows you can’t take it with you after this life is done.

I will never be rich.


But if lightening were to strike me and I won the $250,000,000 Power ball – my single-minded goal would be to die poor — knowing I’d followed my heart.  I’d have a ball spending that money on education, poverty, medical research, care for people with cancer and AIDS, historic preservation, natural resource preservation, and my “pet” cause of animal rights.  Plus, I’d stay-put in my humble little 19th century Philadelphia trinity-house.  Of course $250,000,000 isn’t that much these inflated days.  Its more like the figure where the new low-end of the upper-class meets the high end of the middle class.  A million dollars is nothing anymore – like the old Italian lire – 5 million lire for a cab-ride.  I’m not greedy, and never have been.  I often gave my toys away as a child because it made me feel good.  I didn‘t miss the toys.  It exasperated my mother, but she was the one who insisted I go to Sunday School where I made the mistake of listening to the religious blatherings.  So I started giving things away.

As an adult, I’ve become a self-proclaimed deist.  I believe in a spiritual thread of compassion which flows between us all, and that might be the closest definition to God I can believe-in.  Think of it as the collective conscience of people who care – be they rich or poor.

There’s a controversy about a misinterpreted biblical quote that goes as follows:  “It is easier for a camel to pass through the eye of a needle, than for a rich man to enter into the kingdom of heaven.”

This quote has nothing to do with passing a dromedary through the eye of a sewing needle – that’s cynical absurdity.  The ‘Eye of the Needle’ was a passage gate between the stretch of road from Damascus to Jerusalem.  A camel could make it through those gates quite easily, as could a rich man or an poor man.  This misinterpreted biblical quote refers to the goodness and generosity of the human heart, and is not an indictment of those who’ve accumulated wealth or lack thereof.  It‘s about adhering to goodness and fairness, and has nothing what so ever to do with squeezing a large cumbersome and uncooperative animal through a pin-hole.

I’ve struggled a lot financially over the last couple years, as have so many Americans.  To quote the first paragraph of my diary:  “Among my myriad of flaws is a long held belief that no one would ever dare do anything to me that was outside of my own personal code of ethics. This belief has never served me well, but its taken nearly 50 years to abandon it – if in fact I ever can,”

Being technically unemployed these days I find myself consumed with charity work for the elderly, lost animals, and a variety of things which are close to my heart.  But loosing my job following a work-related injury and thus becoming unemployed at nearly sixty years of age was a ‘sock-in-the-eye’ – I don’t believe I was handled fairly or in a way in which I could have in good conscience conducted myself toward another person.  Welcome to the world of “it’s just business.”

I entered into an agreement with my mortgage company to modify my monthly payments as the economy tanked following the economic irresponsibility of the Bush years.  I sought to take advantage of the newly introduced government HAMP Program to ease my financial burden.  I met all the requirements, faxing and mailing countless documents to a company which is either incompetent or unrepentantly evil.  Nearly a year into this agreement, long after I’d ceased to think about the transaction, I was denied the modification even after repeatedly supplying every last piece of information required of me.  I was told my information was lost, never received or incomplete.  That was not the case.  I went thorough a law firm who assembled my papers – and I have all my duplicate documentation to prove it.  No mistakes were made.  I was robo-screwed by cubicle monkeys for whom the concept of a home being sacred does not compute in their world of indifference and greed.

I was repeatedly called by mortgage collection representatives who gave me false names and threatened me.  One caller, identifying herself as “Amber” called.  I told her my case was in litigation and if she had anything to say to me, she could contact my attorney who is on file with the bank.  I hung-up.  She called me right back and said “Mr Whiting, should you hang-up on me again you will be verifying that you are dropping your lawsuit against CitiMortgage and forfeiting all claims toward modifying your loan.”  I was already in foreclosure by this point, and not having been born yesterday, I hung-up again and passed along the comment and telephone number to my attorney.  My attorney called and was told no one named “Amber” ever worked there.  They use fake names.  On other instances I was called by someone named “Brad” and someone named “Colt.”  NO ONE is named “Colt.”  I’m not buyin’ it.  Porn “stars” assume a nom de plume like “Colt.”

I’ve had my mortgage payments returned to me un-cashed on the same day they’ve harassed me for money.  During this experience I’ve endured a maddening level of insanity that defies all conventional logic.  My case is still pending.

I am one of many Americans who struggle to keep our heads above water, while an aloof, shallow-minded, detached 1.7% of the nation control 88% of the country’s wealth – all done with a blind eye turned.

Republican politicians look forward to slashing the rights and earnings of the most vulnerable in society and the working poor – as well as the most vital people contributing to society like teachers, policemen, nurses, fire-fighters and public servants – all in a grand-standing effort to “pretend” to make fiscal ends meet.  Union-busting is the first step in crushing the middle class’s first line of defense.  Wisconsin Governor Scott Walker is looking at revoking food stamp privileges to striking workers with children and cutting corners in education programs while implementing tax breaks for corporations.

The far right Tea Partiers are forever trying to portray Barack Obama with a Hitler mustache (we’ve all seen the Tea Party protest posters) which makes no sense to anyone with a modicum of understanding of history.  It was Adolph Hitler who said “We must close union offices, confiscate their money and put their leaders in prison. We must reduce workers salaries and take away their right to strike” Now just who exactly does that sound like?  Obama or the talking-heads and Tea Party candidates of the far right wing…?

I was a freelance artist for 23 years before taking my last 9 to 5 job following the faltering economy that came about after 9/11.  But during my freelance career I never took an income tax return due to me.  I would allow it to roll-over into the next year‘s taxes.  Even though I could have sorely used the money.  The reason I did this was (according to my accountant at the time) freelancers who took their income-tax returns raised a red flag, and were setting themselves-up for a tax-audit.  My books were honest and in order – but the mere ordeal of enduring an audit is enough to destroy a small business person.  I’ve seen it happen to a friend, who turned out to be innocent, but ruined all the same.

Stay with me here, I’m getting to my point…

My mortgage company, CitiBank, among others, was bailed-out by taxpayer funds when shady banking practices and Wall Street’s ill-advised investment gambling tanked the US economy.  CitiBank is now making billions of dollars in profits – BUT they didn’t owe or have to pay a single red cent in taxes this year.  Nor did Bank of America or General Electric – or many of the other corporate giants who buy and sell our collective well-being as a nation of individuals.  These companies can retain thousands upon thousands of slippery accountants to take advantage of corporate tax loop-holes promoted by paid-lobbyists who’s “services” are TAX-DEDUCTIBLE for the corporations who employ them!!!  There has got to be something wrong with this picture.  And you bet there is – the corporate tax laws MUST to be changed.  If GE can show $16,000,000,000 (that’s sixteen BILLION dollars) in PROFITS – but don’t owe ONE MEASLY DOLLAR in federal taxes at a time when our nation faces financial crisis after financial crisis…  Me-thinks some CEO’s need holes punctured in their golden parachutes that give them a hard-landing in prison.


I know rich people.  A number of them, and well.

Among my friends are a great many financially-comfortable and out-and-out wealthy people.  Perhaps it’s the fact that I live in a relatively sophisticated urban area, but none of those people asked for, wanted or approved of the Bush tax-cuts for the wealthy.  Nor did they want to see them extended once they were set to expire.  Those people didn’t need those tax-breaks, nor did they ever ask for them.

Baring in mind all I’ve just said something remarkable happened to me this week mostly at the hands of wealthy friends and clients.  Word got out that I was in a difficult financial position because of having lost my job and was instructed with less than 24 hours notice to show prospective income to my mortgage company the day before my conciliation hearing.  Think of it as a legal stunt.  People came-out-of-the-woodwork to help me.  I felt like George Bailey, Jimmy Stewart’s character in ‘It’s a Wonderful Life.’  I now have freelance client commitments stretching well into next year, and letters intended for my mortgage company from people of political and social weight.  These letters are in the care of my attorney to use said documents to show my projected future income.  These documents and corporate emails will be supplied to my mortgage company to let them know I am good for my future mortgage payments.  It was a humbling experience to have friends, neighbors and clients come to my aid in this way.  And I will do my level best on each and every one of those up-coming projects to produce something they will value forever.

But lest we forget, I’m dealing with a mortgage company – a soulless corporate giant who ‘robo‘-calls me multiple times per day.  Doesn’t matter what time it is or if I’m on the toilet, or performing social volunteer work, or holding my late mother’s hand while she was on hospice — My cell-phone will ring, and CitiBank’s robo-lady will say “Hi – THERE…this… is an imPORtant call…for Will-iam Whi-TING from Citi-MORT-gage …” – solely to ruin my day or my moment – as if I didn’t already know they didn’t view me as human.

So let them eat yellow-cake, and not the Betty Crocker recipe.

6 thoughts on “In All Fairness to the Rich”