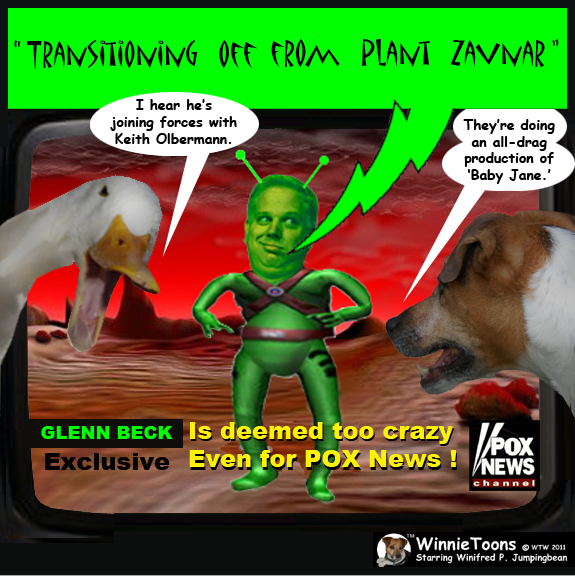 I just got back from Walgreens where I purchased Prilosec OTC in both brand-name and generic.  When the clerk asked me why I was getting both, I replied, “One is a gift.“

Life is getting stranger by the minute, and we’re all processing things as best and as fast as we can.  I’m formally scheduled to attend my mortgage conciliation hearing today at 1PM – but I won’t know until as late as 2 hours before as to whether or not the hearing will be postponed (a.k.a. continued) for the 4th time…  I have every intention of showering and having a clean shirt laid out either way.  All my friends are in turmoil of every description – my friends are making me feel fortunate to merely be facing potential homelessness.  But there is one bright, shining light that gives us all ‘Obama-quality-hope’ – Glenn Beck has been reduced by FOX network to ‘lame fuck’ status.  The very thing all thinking people considered of him from his first broadcast filled with raving delusional paranoid utterances.


Lots of people have found themselves out of work in recent days.  Welcome aboard, Glenn.  Hope you didn’t invest your $30,000,000 a year in junk bonds full of bundled mortgages.

There’s a big difference between Glenn Beck being gently phased-out as “in-house-crazy” at FOX News, and Keith Olbermann leaving MSNBC.  Keith, while deliciously nasty, left the station in protest, true to his own integrity after NBC was largely acquired by General Electric – the ‘Dark Invader’ of light bulb companies – with whom Keith would not do business.  On the other hand, Beck is no longer retaining sponsors while failing to make marginal sense even to his fellow inmates who run the FOX News asylum.  They’re phasing Beck out slowly so he doesn’t go postal and shoot-up receptionists and coworkers.  FOX is deluding the poor incoherent soul into believing he’s going to create his own media empire like Oprah Winfrey – only in a pasty, albino ‘dandelion-gone-to-seed’ sorta way.  In truth, Beck is being “transitioned” into a padded cell with his name on the door right above the imaginary word ’”Star’ which only he can see.’  Remember imitation is the highest form of flattery, and both Beck and Oprah have embarrassing scandals at their privately founded universities .  So it’s only natural to soften his landing as he falls from grace by administering him a heavy dose of horse-puckie.   FOX is going to allow him to do a “special” every now and then.  You can look forward to such classic TV extravaganzas as “Fallout for the Follydaze” – A musical filmed in his own personal bunker to salute the end of time.”  Oh rapture…

But I have other ideas…

For my money, I’d prefer to see an all-drag musical production of “What Ever Happened to Baby Jane” starring Glenn Beck and Keith Olbermann both chewin‘ up the scenery like the male divas they are.  One as a duplicitous old has-been – and the other could play Blanche the victim (or IS she…?)  Whoever plays either part or gets top billing is up to your own interpretation.  However you look at it – they hate each other just like Bette Davis and Joan Crawford did – and just like the original Bette and Joan themselves – Beck and Olbermann – would be simply breathtaking in drag.  I’d even financially back the show myself if I weren’t in foreclosure.  Perhaps I should sell the house and make them a contract offers?  I bet Olbermann would do it – and turn-in a smash-up performance as well – and while Beck has the requisite level of madness for his/her on-stage presence, he’d never have the courage to pull it off in a dress.  In his mind, it’s all about his own delusions – no audience required.

But who do we get to write the music and Liberato?  Gilbert and Sullivan are both dead – coincidentally they didn’t care for each other either – perhaps they can be trans-channeled through Fran Leibowitz.  To quote Gilbert and Sullivan, “Whatever blessed thing you hold is made of sliver and of gold, you long for simple pewter. (W.S. Gilbert, The Gondoliers.)  And there goes Glenn Beck’s infamous precious-ore sponsors.  For Glenn’s sake I hope the radioactive-free picnic baskets he hawks for 3-week stays in your own personal bomb shelter continue to be a big seller for him. 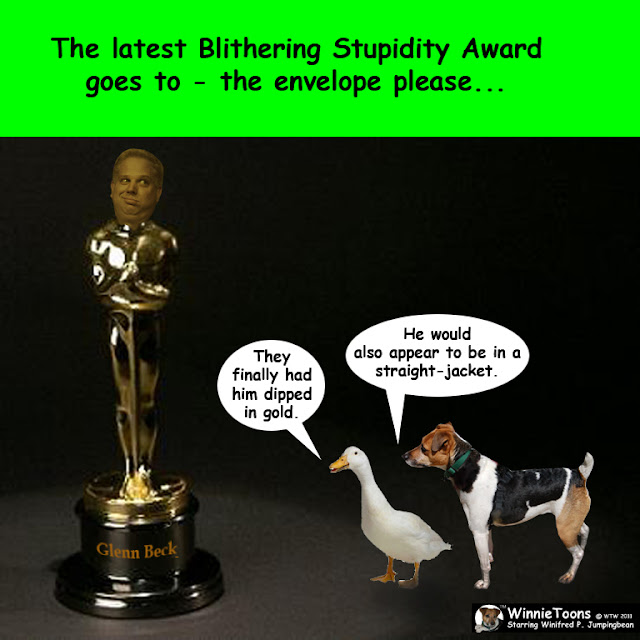