Apparently America can’t get enough of the Palins.  I suppose they ARE like a train-wreck that’s next to impossible to look away – even though you know you’re witnessing a catastrophe in motion. 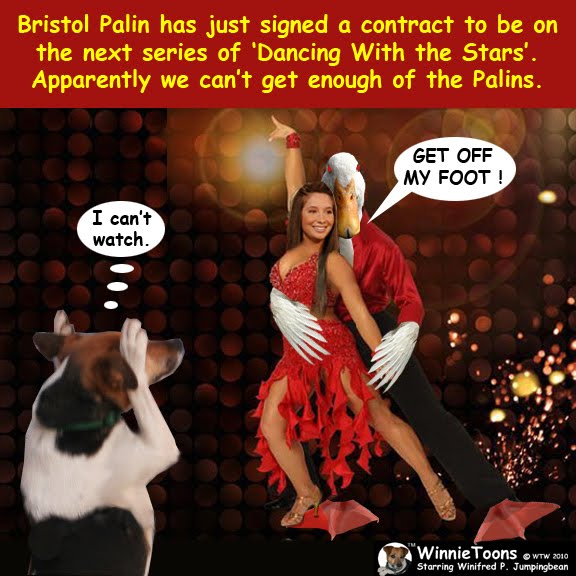 Bristol is signed with “Dancing With the Stars” while ex-fiancee, daddy-Levi, has a reality show deal following his bid for mayor of Wasilla, Alaska.  Meanwhile Sister Sarah has an even more vapid reality venture on the Discovery Channel.  I expect any day now to see Todd Palin on the fishing channel.  I miss the good old days when bikini-clad celebrities on a ‘five-day-career-on-day-six’ were on appearing on “Fear Factor” eating live earthworms.  It’s the end of civilization as we know it. 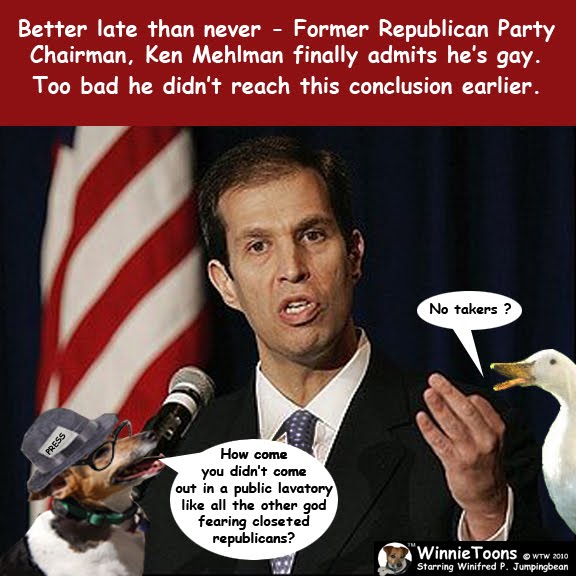 Former Republican Party Chairman Ken Mehlman finally comes outnpublicly telling the press he is gay. Mehlman, who was campaign manager for President George W. Bush in 2004 -and rewarded for that political disaster by become RNC chairman after Bush’s re-election.  Too bad he didn’t come-out when he could have actually done some good while he still had political clout.

Ever try to stop a gigantic boulder from tumbling down a hill…?  I have never actually been late with my mortgage — save one time –of which I will later make mention…

In present light — CitiMortgage has served me with foreclosure papers — which came in UNDERSTATEMENT as a shock.  I have replied by faxing-back copies of the checks in question — all of which were endorsed and cashed by my mortgage company — This irrefutable information was supplied by my personal bank, PNC.  I’ve sent proof to CitiMortgage 4 times now — I’ve scanned things and sent attachments via email — I’ve talked to a wide variety of polyester-zombies — all of whom have contradicted themselves — demonstrating how the right-hand is not at all acquainted with  the left. They’ve even gone so far as to suggest I pay those 5 months OVER AGAIN. Not to mention the dozen or more harassment calls I receive everyday from the collections department — Sometimes the calls start as early as 7:30 in the morning and end as late as a quarter to 9PM.

I’ve been the bewildered victim of predatory lending throughout the history of my experience with mortgage lenders.  I’ve been lied to about my monthly payments — I’ve been driven to the brink of madness exchanging paperwork —– and in the larger overview, since I bought a house I’d originally been renting — I’d actually already paid for the property once in full – before I ever legally bought it.

My original closing took nearly a year and a half because AGES AGO, my landlord’s elderly mother had retained a couple handymen to move the fence in my backyard into the property that adjoins my backyard — (In an earlier era, she had also owned most of the block).

A miserable 13-foot by 9-inch land-measurement of dirt threw my closing date into utter peril. A peril that lasted forever, costing me money. Lots and lots of money.  Turned out the old landlady had, in good faith contacted a lawyer to remedy the the property line legalities — but the lawyer she’d retained — in a stoke of unfortunate timing — was indicted by the federal government on a laundry list of charges — whereupon setting his law office on fire before fleeing to South America.

Has this ever happened to anyone else?

My backyard neighbors offered to sell me the bacon-shaped strip of land for a dollar — but the city wouldn’t allow that to happen. Don’t get me wrong, I love my home, but I detest the middlemen-mobsters who’ve insinuated themselves into our financial lives like leaches preying on us all.

My prior mortgage lender, Sovereign Bank, purchased me (and my mortgage) from WorldMortgage.  And Sovereign wasted no time ‘bending-me-over-a-coffee-table’ by sending me a letter explaining how they’d physically “slashed [my] mortgage check into two pieces in their [own] ‘lock-box'” — (which I have only to assume is some sort of guillotine-like safe) — “therefore rendering [MY] check ‘uncashable'” — (be there such a word…) 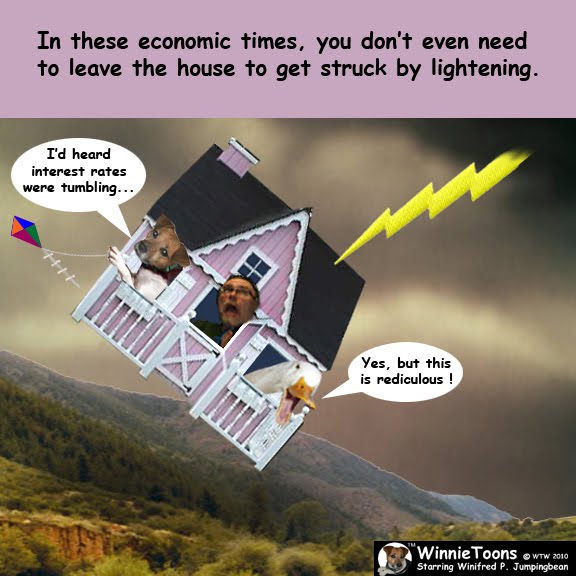 This in-turn led Sovereign Bank to levy a late charge against MY account — as a penalty-fee for MY being late paying my mortgage — in THEIR distored, greed-motivated worldview.

Bottom line — Sovereign Bank mutilated MY mortgage check — and were now charging me for THEIR incompetence. That episode translated into me falling a month behind in my mortgage interpreted only in the eyes of the lender.  It took Sovereign Bank 7-forever’s to acknowledge receiving my replacement check.

Nevertheless Sovereign never budged on their claim that my mortgage was not paid on time — and decreed the alleged late fee would stand.  I refused to pay it on my own principles, with complete disregard for the bank’s definition of  “principal.”

I never paid the fee, and a blot remains on my credit-score to this day.

Flash-forward to my current peril — I can’t imagine what this FIVE MONTH debacle with CitiMortgage, come-car-pile-up-corporate-molestation-in-hell. What will this do to further destroy MY credit rating,  further sucking me into a financial mire created ENTIRELY by the banking industry….

Lest we forget the Schroit family of Galveston, Texas — on whom Bank of America foreclosed, seizing their home and locking them out — when in point of fact, Bank of America was NOT EVER the licensed mortgage lender on their property — effectively catapulting the Schroit family into homelessness.  Once the Schroit family’s case was established as irrefutable fact proving by lawyers they’d been wronged – B of A turned around with ‘bouncing-basket-balls’ and refused to take financial responsibility for their OWN egregious error by fighting the family in court.

If you had any questions as to WHY white-collar predatory-bankers are at the top the financial food chain, this disjointed essay is the best explanation I can offer.  And everyone else BE DRAINED…!!! 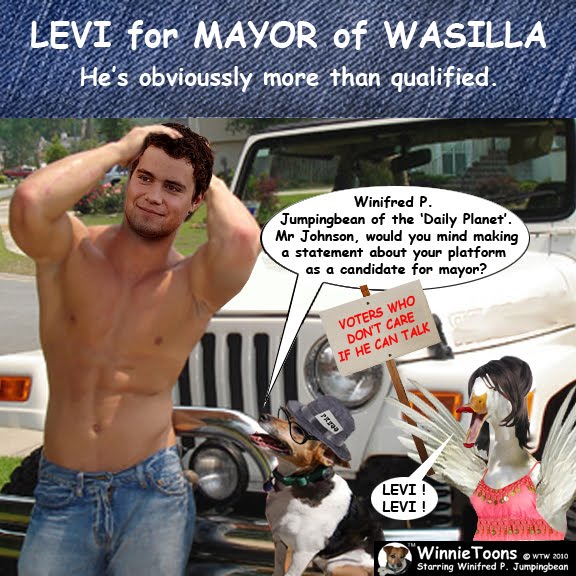 There’s a WHOLE new ‘Thrilla’ from Wasilla’ with :Levi Johnson making a bid for mayor – the job that launched his almost mother-in-law, Sarah Palin’s political career.  I’ve decided handsome or not, this young man has something special other than just looks.  He stands up to Sarah Palin, and that gives him guts by my lights.  Besides, he’s endorsed by Kathy Griffin, (how can you go wrong) and he’s grown-up past his original prejudices and homophobia.  VOTE LEVI, if only for how his Johnson fills out his Levi’s – but vote for him, Alaskans. 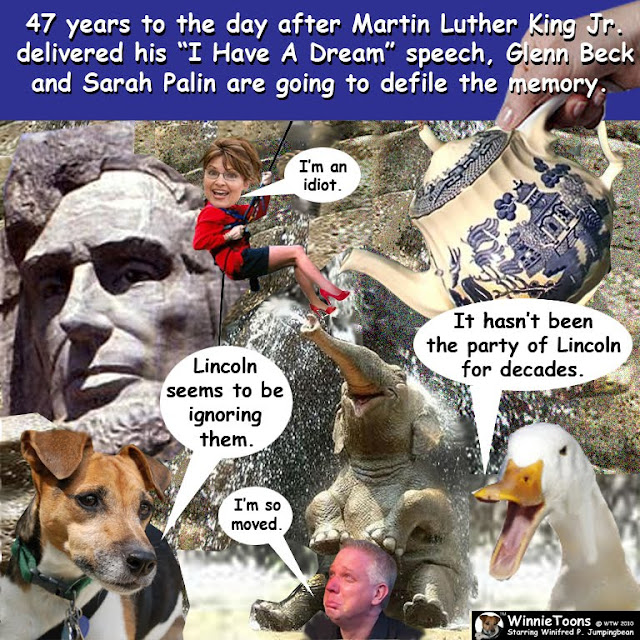 I love both tea-baggers AND tea-baggin’.  You gotta cut ‘em some slack this week.  They’re all hyped-up because they have media whores, Glenn Beck and Sarah Palin gathering to speak at the Lincoln Memorial  celebrating the historic words of Reverend, Dr Martin Luther King Jr while handing-out maps to show out-of-town-hicks how to navigate Washington, DC so as to avoid seeing any Negroes.

You can get the maps online through the Huffington Post, who’ve re-posted it for shits and giggles. 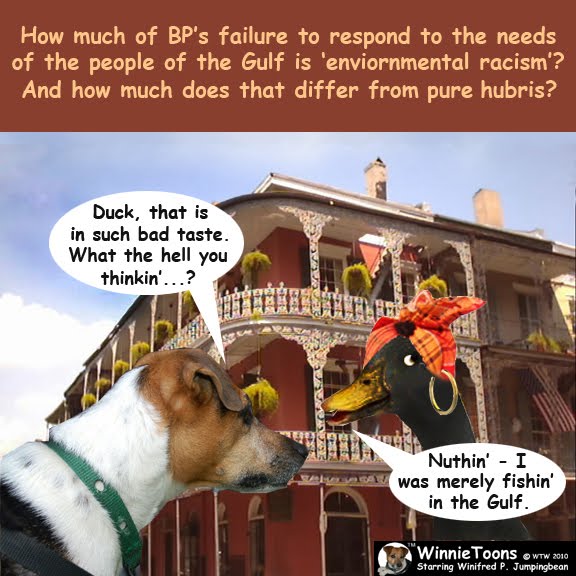 I suspect environmental racism as playing a large part of the on-going disaster in the gulf.  Large companies and people with good lawyers will be compensated, but will minorities the average person who’s been impacted by the loss of a home or a job?  Will they do anything to restore the ecosystem?  Probably not.

Here in Philadelphia, wealthy West Chester is clean as a whistle. Whereas Chester, the next town over is poor, and gets the refineries, toxic duping sites and the short end of the stick.  Sadly the best thing the good people of Chester were awarded, was a casino, which will do little to enrich the agerage resident still reeling from Katrina.

Will BP find a way to avoid paying for the bedlam the created?  You bet they will. 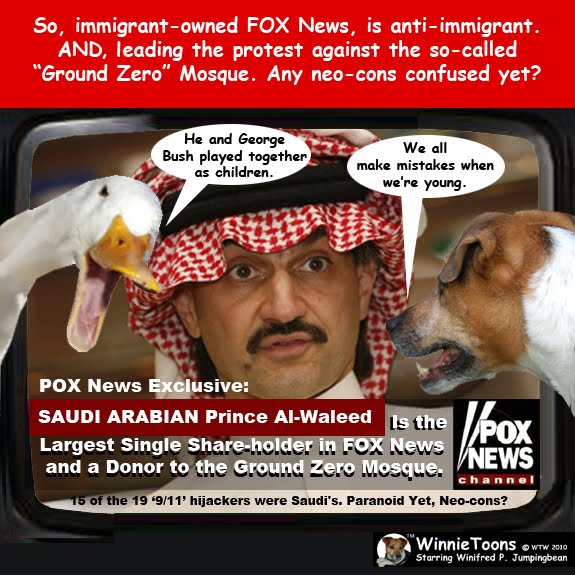 Noted political humorist, H.L. Menchken said: “The whole aim of practical politics is to keep the populace alarmed (and hence clamorous to be led to safety) by menacing it with an endless series of hobgoblins, all of them imaginary.”

Today, FOX News is the agent for right-wing extremest views.  FOX News is owned by Australian immigrant and media mogul, Rupert Murdock, including Fox Entertainment and News.  FOX News immigrant bashes on a regular basis on all their faux news programming.

FOX News is leading the charge of hysteria on the mosque controversy a couple blocks from Ground Zero.  The single largest private stock holder of FOX shares is Saudi Arabian Prince Al-Waleed.  Prince Al-Waleed has made a half million dollar donation to the mosque at the center of this controversy. 15 of the 17 – “9/11″ hijackers were Saudi Arabian.  The Bush brothers grew-up as friends of the Saudi royal family as a result of their father, George H.W. Bush’s Middle Eastern oil interests.  Check the facts, that’s just the tip of the oily iceberg.

Any one who has their eyes open to the nonsensical rhetoric coming from the religious “right” – the inconsistencies are staggering. Jews traditionally hand their religion down through the maternal side of the family. Right-wing neo-cons are always singing in church “Jerusalem, Jerusalem” and “Oh Issss-isss’rael…” – but they’re mostly anti-Semitic if you get ‘em aside and let them blather-on. 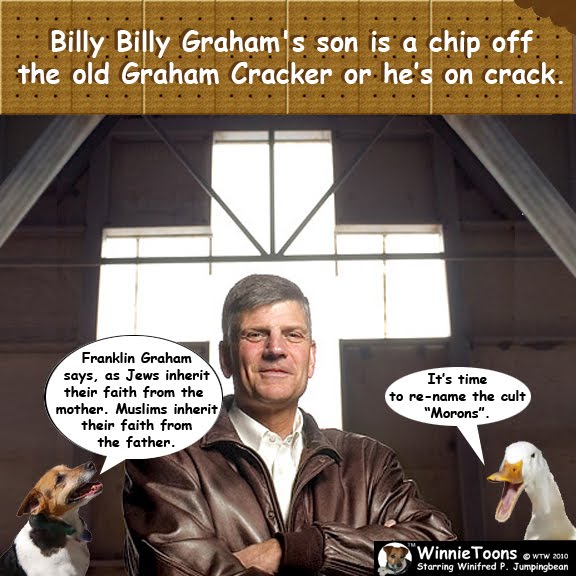 Jesus was a Jew, and his execution was more the doing of the Romans. Now Mormon neo-con, Franklin Graham (who’s father, Billy was caught on the Nixon tapes making antisemitic comments) has shot-off his mouth saying that Obama has to be a Muslim, because that faith is genetically handed-down through the father. My father was a a mechanical engineer, and my mother was a housewife.  I am neither.  Give a person a chance to define themselves.  It’s not up to dimwits, like Franklin Graham. 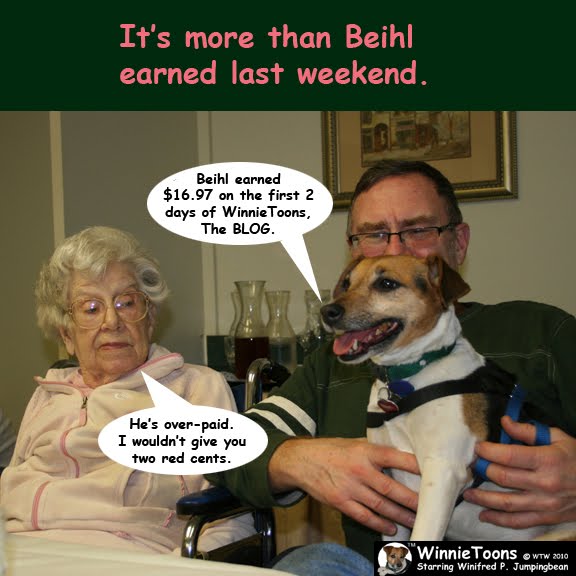 Today is Grandma Betty Day.  And one week from her 90th birthday (which should be interesting to say the least).  Our family are all gathering from all over the country to gander at the last of our family’s WWII generation.  Grandma Betty didn’t serve, but she knitted-up a storm of scarves, gloves and VERY cool boat-necked sweaters for the servicemen.  She knitted me a couple when I was younger, and I wish I still had them – they made me look V”-shaped and built.  http://winnietoons.blogspot.com/